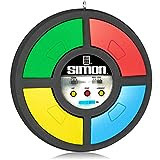 Stars: 5 out of 5
Pros: Captures the toy, complete with sound and light
Cons: Mostly a nostalgia piece, but that audience will love it.
The Bottom Line:
This electric game
Designed for 80’s children
Nostalgia for tree


Let Simon Beep and Flash on Your Tree

While I never had the game Simon as a kid, I had friends who did, so I know I played the game a time or two.  Still, it wasn’t quite as embedded in me as a warm childhood memory, so I thought a little while before I snagged Hallmark’s ornament version of the classic.  Just before my favorite store sold out, I caved and got him.

The idea of the game was sort of like “Simon Says.”  The game would create a sequence by flashing a light and a different tone under the four different colored buttons.  Once it finished, your job was to repeat it back correctly.  Each time you got it right, it would increase the length of the sequence.  My memory for this kind of thing being what it is, I was never very good at it.  Then again, maybe it I’d had my own I would have done better.

The reason I explain the game is to explain why the magic portion of this ornament is so cool.  If you press any of the buttons in the middle of this ornament, it will play one of three sequences.  The first one is short with only four beeps, and the other two get increasingly longer, the third ending with a miss.  Obviously, you can’t repeat the sequence back like you could with a real Simon, but this is still a fun feature.  To make it work, you do need to install two button batteries in the back of the ornament, but your first set comes with it.

Like the original game, the back of this ornament is flat.  Of course, when you lay the ornament down that way, you don’t really get to see the details on the front that make this ornament.  As a result, I recommend hanging it from the hook at the top of the circle.  Yes, there is a top thanks to the writing on the game.  It’s really no surprise since we are hanging a circle to find that the ornament hangs straight.

Even though I never had this game, I still know enough to know this is exactly what the game looked like.  The little details of the game start buttons, the skill levels, and the writing make this a fun ornament for anyone who loved to play the game.

Since I never had one, buying the Simon ornament wasn’t as big a trip down memory lane for me, and I almost passed it up.  Still, I’m glad I caved since it is a fun way to capture a classic toy from the era of my childhood.