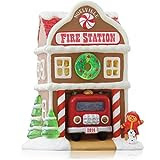 Stars: 4 out of 5
Pros: Lots of parts that light up, some fun touches
Cons: Could use more decorations overall
The Bottom Line:
This fire station
Is pretty when lit but could
Use some more color


Putting Out that Roasting Gingerbread

When coming up with ideas for the ornaments in a town, I don’t know that a Fire Station would have been one that would leap out to me as a logical one to do.  I’m not sure why, but it just wouldn’t be.  And yet that’s exactly where we go for this year’s Noelville ornament, and it’s a good choice.

The Fire Station is a two story square building.  The walls are brown, naturally, since Noelville is a gingerbread house town.  There’s an arch up above the second story with Noelville Fire Station written on it and a peppermint where you might expect a round window to be.  There’s a wreath in the middle of the second story with windows on the sides.  And on ground level, the door is open to see the fire truck with a gingerbread fireman and a small Dalmatian out front waving at us.  There are a couple of candy pine trees over to the other side, and plenty of hard candy creating the roof.

When I first saw the picture of this one, I was happy.  It looked nice with some good detail and the potential for lots of light shining through it.  However, reality hasn’t been quite as kind to this ornament.  When you really stop to look at it, you realize how plain brown it is.  Yes, there are windows on three of the sides and the front looks good, but overall, it looks brown.  It’s still not as detailed as the first few ornaments in the series were.  Don’t get me wrong, I like what is here.  It’s just not quite as great as it could have been.

As I hinted above, this ornament has a hole in the back, and you can stick a Christmas tree light in the back to make the windows of the ornament glow.  Actually, more than the windows glow – the roof, the trees, and the fire engine glow as well.  Sadly, the arch hides most of the roof’s glow.  That’s a minor complaint, however, since I love this series for the glowing the pieces do, and this one lights up pretty well.

Being a building, there’s a nice base under it, so you can set this out and create a town if you have the entire series.  Some year, I’m going to do this instead of putting my churches out.  Some year.  You’ll also find the 9 in a Christmas tree on the base indicating its place in the series.

For the time being, I’m hanging this ornament on my tree like I do with the rest of the series I display.  The hook is at the top of the ornament’s roof pretty much in the middle, so it’s no surprise that the ornament hangs straight side to side.  With the stuff out front, the ornament actually tips a little bit to the front, by with mind on the tree and attached to a light, I hadn’t hadn’t noticed at all.

The series is beginning to recapture the glory days of the first few ornaments, but it could still use a bit more detail and color to the pieces.  Even so, fans will be happy to add the Fire Station to their Noelville village.