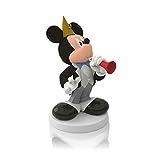 Stars: 4 out of 5
Pros: Mickey dressed up to welcome in the New Year
Cons: Noticeable tip straight forward
The Bottom Line:
Mickey in a tux
Adds festive touch to New Year
Celebrate with him


Mickey Is Bringing Class to Your New Year’s Celebration

New Year’s Eve parties are always enjoyable.  I’ve attended many over the years, and always had a great time playing games and waiting to welcome in the New Year.  However, I’ve never done it with quite the class that Mickey does in Mickey's New Year, the sixth in the Year of Disney Magic series from Hallmark.

You see, Mickey is all decked out in his finest to ring in the New Year.  And his finest is a tux.  I usually wear jeans and a T-shirt to these parties I attend.  Suddenly, I’m feeling under dressed.  In addition to the tux, he’s also got a gold party hat on his head and is blowing into a red horn/noise maker.

Honestly, it took me a little while to realize that Mickey was wearing a tux, but I really can’t complain because he is.  I mean, the ornament itself looks great.  And you know Mickey is celebrating some important event.  What’s more important than a New Year and the future it could bring?  And this is Disney, so you know it has to involve a happy ending, right?  That’s certainly worth celebrating.  I also have to comment on that hat.  It’s your standard pointed hat, but the way it is on his head, it looks like a Mickey ear hat, at least to me.  I know that’s not the case, but that is always my first response when I see it.

This is the sixth in the series (look for the six in a Christmas tree on the bottom of the ornament), and this is the first time we’ve repeated a character.  Granted, Mickey was also the fifth in the series, so our first repeat is back to back.  And it would have been nice to include another character who only gets one appearance in the series (since Mickey has one more appearance coming up), but these are both minor complaints.

However, the ornament does tip forward.  It’s a fairly noticeable tip, unfortunately.  On the other hand, the circle base that Mickey is standing on does provide a nice flat surface to stand him on.

But that’s the only flaw I can find in Mickey's New Year.  So buy it and have Mickey help you right in the New Year.