It's Friday!  I'm looking forward to Hallmark's Ornament Premier on Saturday.  But before we get there, it's time for Book Beginning and Friday 56.

I just started a reread of the 11th book in an old favorite series.  I'm reading Mrs. Pollifax Pursued by Dorothy Gilman. 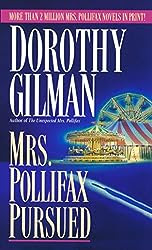 For those who aren't familiar with the series, Mrs. Pollifax is a grandmother, widow, garden club member...and part time CIA agent.  Her boss at the CIA is Carstairs, so you might guess just how much I love this series.

Henry Bidwell was rich, but this was of little consequence to him since he had always been rich.

"Could we go back?" Kadi asked eagerly.  "Could we rescue him?"
Mrs. Pollifax shook her head.  "You've become dangerous to them, Kadi, presumably because you're a friend of Sammy's."


It's probably been close to 20 years since I read this book, so I don't really remember much of the plot.  I'm not much further than the 56, but so far I'm really enjoying it again.
Posted by Mark Baker at 12:00 AM