Music Review: Peace Like a River by Chris Rice 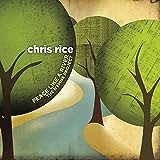 Stars: 5 out of 5
Pros: Simple but beautiful arrangements of classic hymns that let you enjoy the powerful lyrics

Cons: Only 10 tracks
The Bottom Line:
Simple, powerful
Timeless lyrics of these hymns
Will still speak to you

I haven't been that happy with the last couple of big releases from Chris Rice.  The style and lyrics weren't up to his usual standards.  In fact, my favorite from the last few years has come to be Peace Like a River: The Hymns Project.  There is nothing flashy or showy about the disc.  But the way it highlights the wonderful lyrics makes it great.

Normally, I don't give musician and production credits, but I am going to break tradition this time to highlight just how simple everything is.  Producing is Chris' long time producer Monroe Jones.  On guitar, we have the ultra talented Scott Dente (of Out of the Grey fame).  And on piano and vocals we have Chris Rice.  Yep, that's it, at least according to the notes.  I would swear that some of the vocals on the disc are done by multiple people, but if so, they don't get any credit.

Many artists who do a hymns project include medleys of the first verses of several songs.  That way, they can sample between 20 and 30 songs on a project.  Chris doesn't do that.  Each of the 10 tracks features just one hymn, so we get multiple verses of that hymn.  Since all the songs here are in the Public Domain, all but one were immediately familiar to me, although I will confess I didn't know all the verses.  I love the ability to learn those extra words with this disc.

The disc starts out with "It is Well with my Soul."  The arrangement is suitably slow with Chris' piano playing providing some of the traditional echo in the hymn.  This is one of the few songs where I would swear I hear more than Chris' vocals in the background.

None of the songs are truly upbeat, but "Rock of Ages" comes close.  Again, it's Chris and his piano.

"O Freedom" was the only song on the disc I didn't know before I got it.  It's an old spiritual, and the syncopated rhythm and the string slaps on the guitar help give it a bit of a Southern tinge.  About half the songs only feature one instruments, so when we get more it really stands out.

"A Mighty Fortress" finally gives us a chance to hear Scott's guitar.  He finger picks hymn.  I've always heard this one done is a majestic, stately way, but Chris speeds it up and little but keeps the volume down.  It's a bit different, but I like it.  And yes, we've got keyboard with the guitar in between verses on this song.

Guitar takes center stage again on "O Love that Will Not Let Me Go."  The tempo is slightly upbeat, but the minor key is kept.  Chris provides some excellent background vocals on all the songs, but here he really excels.  At times, the song is more of a duet, and the harmonies are top notch.

"Great is Thy Faithfulness" is a more traditional arrangement.  Again, the guitar is the main instrument, but it is backed up with a keyboard, providing a fuller sound.  Frankly, it almost sounds like they brought in strings for this song.  If you really listen, you can tell there aren't any violins, but if you are only half listening, you'd swear they were there.

We're back to piano for "Old Rugged Cross."  Again, the tempo is slightly faster than I normally sing it in church, but it works quite well.

"How Great Thou Art" is appropriately reverent.  This one is a duet between keyboard and piano, and it adds a nice tone to the song.

"Before the Throne" is indeed a duet.  Yes, there is some piano in the background, but the main focus of the song are Chris' vocals.  Through the wonders of modern recording, he sings both parts of this duet.  The harmonies are enough to give me goose bumps.

There is absolutely nothing flashy or showy about this disc.  Anyone could produce something similar in their own home.  But that doesn't make it any less grand.  By keeping things simple, Chris Rice has allowed the awesome lyrics to shine through.  Frankly, I wish there were more tracks on the disc.  Of the several hymns collections I have, Peace Like a River is the one I tend to pull out the most.