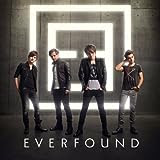 Stars: 4 out of 5
Pros: Some good lyrics and fun songs
Cons: Some weakish lyrics and repetitive sound
The Bottom Line:
Impressive debut
These brothers have room to grow
Still enjoy this disc

The Brothers of Everfound Offer a Fun Debut

A few months back, I got my hands on a sample disc offering two songs each by two new groups.  I'd heard of neither, yet the sampler worked since I found myself wanting both of the discs.  Everfound has proved to be a different sound for me, but I'm really enjoying the disc.

This is the major label self-title debut for the rock band.  They've released a few independent projects over the last few years, but have recently signed with Word Records.  The band consists of four brothers who, while they grew up in , immigrated from as kids.  It's an interesting back story and helps explain the names for the two short instrumental tracks on the disc.

Stylistically, the band is very rock - more rock than I normally enjoy.  I've been enjoying it here, although I do find that the songs run together a bid.  Some more variety would certainly help on future discs.

I'm also going to throw the boy band label out there.  Don't get me wrong, they are more rock than anything else, but I still here a big of the harmonies and that boy band feel, but maybe it's just me.

The young men in the band are still young, the oldest brother being early 20's, and that comes through in a few of their songs as well, which feel just a tad on the shallow side.  Still, I have such fun listening to them, it's hard to care too much.

And that certainly isn't true with "Never Beyond Repair."  This is the song that first really caught my attention, and it's still my favorite on the disc.  It's a mid-tempo anthem that really builds as the song progresses, and it reminds us that God is able to forgive anything.  That is such a comfort as I continue to stumble and struggle against sin.

At times, the band falls victim to the over-produced/voice playing sound that seems to be popular in rock music.  Personally, I've never cared for it.  For example, on "Unless" they use it once or twice.  I guess I'm old fashioned.  I just like listening to the singers sing.

On the other hand, the first real song on the disc is a great call to action with "Go."  It sets the tone with some hard rock sound that is easy to enjoy.

There really are some good songs on this disc.  "Count the Stars" is a great reminder that we are made for more than life on this earth.  "God of the Impossible" actually is a song of commitment to God because He can do anything.  And yes, "Hallelujah" is a song of praise, but it's also a commitment to turn away from sin and live for God.

Songs written from God's point of view can be very tricky to pull off, but with "Hurt" I think it works very well.  The song is about how God feels the same pain we do because of His love for us.  It starts out rather slowly, but it builds in tempo as it builds and actually works quite well with the lyrics by the chorus.

As we get into the last few songs of the disc, the lyrics tend to get a little weak in my opinion, and there is little to make these songs stand out from the rest of the disc.  That changes with the final track, "What Love Means."  Borrowing heavily from Romans 8, the song reminds us of the love Jesus showed for us when He died and how much that means He obviously still cares for us today.

I think the young men of Everfound have some maturing and growth to do yet, but they are off to a strong start.  The disc will certainly appeal to a younger crowd overall, but there are some gems here.  I look forward to watching their career build because there is the potential for great things from them in the future.