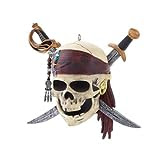 A Pirate’s Life for Your Tree

I seem to keep buying Disney’s Pirates of the Caribbean ornaments from Hallmark.  While I enjoy the ride and the movies, I wouldn’t have considered myself nearly as big as fan of the series as I guess I am.  The 2013 release was another one I just couldn’t resist.

This ornament is the logo from the movies.  That means I’ve got a skull hanging on my Christmas tree.  The ornament is mainly a grinning skull wearing a red bandana with a couple of baubles hanging from it.  One of the baubles is attached to the rest of the ornament, but the other is dangling.  Behind the skull are two swords crossed to form an X.

This is a strange choice for a Christmas ornament, I must confess. It would be more logical if I decorated for Halloween, but since I don’t do that, I’m stuck with hanging it on my Christmas tree.  I guess it’s the DisNerd in me that was so excited to get this one I honestly didn’t care if it fit the spirit of Christmas or not.  I was just excited to have it.  It looks just like the logo, which means it is a little creepy but still very fun.

Although the magic element certainly helps.  If you install the two button batteries (your first set is included), this ornament will play a clip of one of the main themes from the soundtrack of the films.  Just hit the button on the right side of the ornament and you’ll get 30 seconds of music.  It’s the main theme from the movie, and anyone who loves the movies would recognize it easily.

I must not have been the only one who enjoyed the combination because this was a fairly popular ornament.  Yes, some were more popular, but this was a rare one to find after Christmas.

Because this is a skull with two swords sticking out the bottom, it won’t stand.  You’ve got to hang it if you want to display it.  Fortunately, the loop in the top of the skull is in the perfect spot, and this one hangs straight with no trouble at all.

Fans of the Pirates of the Caribbean franchise will want to track down this ornament.  It’s fun, and the music adds a great touch.  And if anyone comments on having a skull on your Christmas tree, just send the pirates after them.