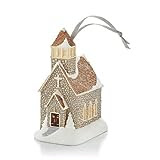 The Faithful Gather on Christmas Eve in this

Since I was a fan of Hallmark’s Candlelight Services series, it was an easy choice to start the unofficial series of churches sculpted by Don Palmiter.  While not part of the official series which ended in 2009, these three churches certainly fit the mold and include a touch of Hallmark magic to boot.  2013’s entry, O Come All Ye Faithful, was a delightful addition with one difference.

This year’s church is an old fashioned stone church.  You can easily picture this church being one of the first buildings built in a colonist settlement.  It's gray with a brown roof and a cross on the front.  As you'd imagine, there is snow on the ground and a little on the roof.  The snow includes glitter, so it does sparkle, with is nice.  There is, of course, a walk way leading to the front door.

Like the other two that Don has done, this ornament features a sound clip.  Based on the title of the ornament, I’ll give you three guesses, and the first two don’t count.  No, we don’t get a choir singing, but we do get a nice organ version of “O Come All Ye Faithful.”  It sounds like a call to worship or prelude to a Christmas Eve service.  To play the sound clip, you’ll need to install two button size batteries in the bottom of the ornament.  The song lasts about 25 seconds and actually starts with a bell ringing, which just adds to the call to worship feel.

Now here’s where the ornament surprised me when I first got it home.  All the others, both in the official series and in Don’s unofficial continuation, contained windows that would light up if you connected the church to a light string.  This ornament doesn’t have that.  No, it was never advertised that it did, and if I had known, I would not have been surprised when I opened the ornament.  Still, it is disappointing because that is one of my favorite aspects of the series.  The windows are yellow, so they do already feel like they are glowing, but some light coming from inside would really add to the feeling.

The base of this ornament is nice and flat, which is perfect for displaying.  Personally, I displayed mine with the rest of my churches in the series on my TV stand.  It really looked like it fit in except for the windows.

If you want to hang the ornament, you’ll find the loop on the back of the belfry.  Even with it being so far in the front of the ornament, it hangs perfectly straight.

Despite the lack of glowing windows, I do still like O Come All Ye Faithful.  I just wish it fully matched the rest of the official and unofficial series.

While not an official part of the series, check out the ornaments in the Candlelight Services series.