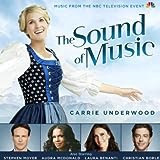 I have a confession to make.  As much as I love the musical The Sound of Music, I only have one soundtrack from it – the original Broadway cast.  At some point, I really do intend to buy the Julie Andrews movie version, but there are a couple songs that the movie cut I loved.  However, that sound track I have has some issues, and I’ve wanted to replace it for years.  Enter the Cast Recording from the recent The Sound of Music - Live, and I’ve found exactly what I’m looking for.

All of your favorite sounds from the musical are here.  We’re talking “My Favorite Things,” “Do-Re-Mi,” “Climb Every Mountain,” Edelweiss,” and “The Sound of Music,” among others.  However, if you are only familiar with the movie, some things are going to be different here.  The movie changed the order around, but this one sticks to the order from the original Broadway play.  When I was in the play in college, I must admit the new order took a little getting used to, but once you do, you won’t mind at all.

The only change this disc makes as far as songs go from the original is the song that Captain Von Trapp and Maria sing after they fall in love.  Here, we get the song from the movie, “Something Good.”  Honestly, I don’t care for either of the love songs, so I’m ambivalent about this.

The soundtrack uses a full orchestra, as it should.  The instruments sound amazing, and it’s easy to get swept up in the beauty of the music.

And the singing?  It’s wonderful.  Carrie Underwood’s acting as Maria was criticized in the movie (and rightly so), but if you watched the movie carefully, she came alive whenever she was singing.  That means there are no issues whatsoever with the songs she’s in.  (And honestly, the couple of lines she speaks on the recording are better acted than Mary Martin’s acting at the same spots.  Yes, I went there.)  The rest of the cast is great.  The kids don’t miss a note.  Audra McDonald is amazing as Mother Superior.  Stephen Moyer has a great voice, so his songs as the Captain are top notch.  Rounding out the main cast of singers are Laura Benanti as Elsa (the Captain's ill-fated love interest) and Christian Borle as Max who both do fine jobs as well.

So let’s talk about those two songs cut from the original movie.  Both are songs that Elsa and Max sing.  Captain Von Trapp joins them on the second song.  From the first act, there’s “How Can Love Survive?”  Elsa and Max sing this song to the Captain as a bit of a joke.  The idea behind it is that, since the Captain and Elsa are rich, they have no struggles to overcome, so how can they possible make it.  After all, the famous couples in love overcome great odds.  It’s part bragging (Elsa), part jealousy (Max), and quite funny.

The second song cut from the original movie is the first song from the second act - “No Way to Stop It.”  Again, there’s some biting humor to the song, but there is a seriousness underneath it all.  It comes as the Captain, Elsa, and Max are discussing the growing Nazi threat, and Elsa and Max try to use this song to convince the Captain that he should not try to fight the Nazi’s.  I especially love how Stephen Moyer plays this song.  In the movie, it was easy to tell how disgusted he was, but it still comes across in his voice on the recording.

There are some other songs on here that are lesser known.  The disc starts off with the nuns’ evening prayers.  We get the song sung during the wedding as well as the two dance songs from the party in the first act.  And the final track is the instrumental piece that pays over the credits.

I have to comment briefly on the fact that this was recorded in a studio and not the soundtrack taken from the filmed live performance.  I can understand why (partly because this was released before the movie), but I do still find it ironic.

The only flaw I can find with this disc is the fact that they took out the middle section of “Do-Re-Mi.”  Yes, the song can get repetitive and long, so maybe that is why.  But since they included the entire song in the movie, I’m a little confused as to why it isn't all here on this recording.

Still, that’s not nearly enough to be a deal breaker.  I’ve found a new preferred version of the play soundtrack with The Sound of Music - Live Cast Recording.  Still, I’m going to get the original movie soundtrack some day.