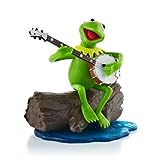 
Of Frogs and Rainbows

Over the last several years, I have really been enjoying Hallmark’s unofficial Muppet series.  Even if I didn’t, I would have been a sucker for 2013’s release.  After all, even the casual Muppet fan would enjoy The Rainbow Connection.

This ornament features Kermit the Frog sitting on a log in a pond.  He’s holding a banjo and getting ready to sing.  The ornament is nice with lots of great detail on Kermit and the log.  Yes, he’s plastic, but that’s the only flaw I can find when I look at him.  I honestly expect him to feel fuzzy.  And one detail I absolutely love is the water.  It’s a translucent blue plastic that perfectly gives us the feeling of the water.  It’s much better than the opaque plastic I would have expected them to use.

As with the others in this unofficial series, this is a magic ornament.  When you press the button on the right side of the log you get a sounds clip of Kermit singing “The Rainbow Connection,” one of his classic songs.  It’s a more melodic song than “It’s Not Easy Being Green,” which is the only other song I could think of associated with Kermit.  And the nice thing is they give us a nice long clip.  We get all of the first verse and the chorus, which blew me away when I first heard it.  At just shy of a full minute, this is the longest battery operated magic ornament I’ve seen.

Speaking of batteries, it does take three button batteries, and your first set is included for you.  They fit into the bottom of the ornament quite nicely.

The bottom of this ornament is flat, so the bigger Muppet fans can leave this one out to enjoy year round.

However, those same die hard Muppet fans do have an issue with this ornament – the sound clip isn’t Jim Henson’s recording of this song.  Instead, it’s a newer recording with one of the people who has voiced Kermit since Jim's death.  Honestly, I don’t know the difference in the voices enough to notice.  I don’t know why this particular recording was made (rights? length?), but it doesn’t really bother me either.

For those who just want to hang it on their tree to enjoy in December, you’ll find the loop for hanging the ornament on the back of Kermit’s head.  It does tip slightly to the left, but by the time you get it in the branches of your Christmas tree, you'll never notice.

Okay, so The Rainbow Connection has little to do with Christmas.  I don’t care.  I love the sculpt of this ornament and the sound clip is great, in my opinion.  I’ll proudly be displaying this one for years to come.