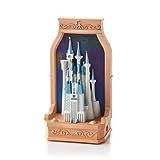 Stars: 5 out of 5
Pros: Fireworks, fun music, and a great castle ornament, too.
Cons: None
The Bottom Line:
Disney fireworks show
Safely shrunk for Christmas tree
Creative and fun

Remember the Magic of Castle Fireworks Every Year on Your Tree

If you had ever told me I’d have a fireworks ornament on my Christmas tree, I would have laughed.  And yet, that’s exactly what Hallmark managed to pull off with 2013’s Cinderella's Castle ornament.  Oh, they aren’t real fireworks, but the effect is pretty good.

The ornament looks good, but if you don’t know about the fireworks, you’d think it could be better.  That’s because the ornament is Cinderella’s castle from Disney World coming out of a dark background with yellow, green, and red fireworks painted on it.  Yes, the castle is mostly 3D, but there is that little part that is stuck in the background that would look weird.  There is a tan border around the entire ornament that looks like stone.

See, this is one of Hallmark’s magic ornaments, and it runs on three button sized batteries.  There’s a button the right hand side that starts the show.

And show is the right word this time around.  When you hit the button, music starts.  What song?  “When You Wish Upon a Star,” of course; this version sounds like it could be a theme song for any of the TV shows or movies or possibly during a fireworks show at the park.  While it is playing, the fireworks go off in the black background behind the castle.  Essentially, they’ve got lights set in certain points behind the background that light up on cue and the sound effects to make it sound like fireworks going off.  They just light up and go off in the same patter every time, but really, the overall effect is lots of fun.  It’s a wonderful touch, and I honestly don’t know how they could do it any better.  All told, the music and fireworks last about 30 seconds.

If you wanted to, you could leave this ornament out all year long since the bottom is flat.  It would sit on a desk or shelf perfectly to be enjoyed.  And since Disney parks do fireworks show all year long, it would be appropriate.

However, if you want to hang it, you’ll find the little brass loop sticking out from the top.  It hangs straight, which isn’t a surprise when you look at how the ornament is designed.

So Cinderella's Castle proved to be too much fun for me to resist.  Not that I tried that hard because I can tell this is an ornament I will enjoy for quite some time to come.