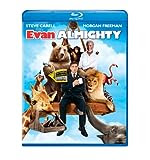 Stars: 5 out of 5
Pros: Fun and believable

Cons: Only if you are expecting wall to wall laughs
The Bottom Line:
Subdued comedy
Plenty of laughs, also heart
Sure to entertain


Changing the World One Ark at a Time

News anchor Evan Baxter (Steve Carell) has just been elected to Congress. Packing up his wife Joan (Lauren Graham) and three kids, they move to a valley in . They've got a new car and a just built giant house. Life is good.

Things seem to be going well for the freshman Congressman at work, too. Evan has a nice, big office, and Congressman Long (John Goodman) is asking him to be a junior sponsor on a new bill. This could be just the ticket he needs to launch his political career and fulfill his campaign promise to change the world.

But then weird things start to happen. A box of building supplies appears on their doorstep. The next morning, lumber is delivered. And everywhere Evan goes the numbers 614 keep appearing.

Then God (Morgan Freeman) appears to Evan and tells him to build an ark. If anyone asks why, he's to tell them that a flood is coming. Never mind that the city is in the middle of a huge drought. Can God get Evan's attention? Will Evan obey?

It took me years to believe my friends that Bruce Almighty wasn't the blasphemous movie I thought it to be. But that lesson in judging things before you see them is a story for another time. With the lesson learned, I decided to give the sequel a chance and see what I thought of it. The truth is I loved it.

The movie is believable. From Evan's reactions to all of God's appearances to Joan's belief that her husband is crazy to the media circus the huge ark creates, I bought every minute of the story. That made some of the moments that much funnier. The movie does resort to some slapstick at times. Some of it worked; some of it didn't. I wasn't laughing the entire way through the film, but I laughed plenty and left the theater with a smile on my face.

The movie is heartwarming. As with the first, there are some lessons here. Thanks to God, they might be a little more blatant then in most movies. But they are slipped in nicely and never slow the action down for long.

Steve Carell breaks the old adage about never working with kids and animals here, but he comes through just fine. Yes, there are plenty of cute moments with the animals, and I can't believe all they got the animals to do. The training alone must have taken forever. Yet the movie doesn't slow things down to show us animal tricks. Instead, they add to the story.

But back to the humans. Steve Carell is outstanding. I am not a huge fan of his work mainly because I haven't seen much of it, but I can see why he gets so much praise. He brought most of the believability to the film. I could honestly picture myself reacting much as he did through out the film. And he gets bonus points in my book for a few of those scenes with the animals. I certainly would have been freaking out.

The other actors are all great as well. Lauren Graham shows the right amount of exasperation as Evan's long suffering wife. John Goodman balances friendly and menacing perfectly. And Morgan Freeman is once again clearing enjoying playing God. Special mention must be made of Wanda Sykes who plays one of Evan's Congressional aids. Her character could have been over the top, but she pulls it back and gets lots of laughs.

Obviously, the movie talks a lot about the Biblical story of Noah, and those most familiar with it will find a few hidden jokes to enjoy. The majority of them were explained to the audience, so don't let that stop you. I was wondering how this movie would line up with the Bible, but there is nothing here that contradicts anything in the Good Book. Granted, it's just a movie, but I was still impressed when I realized what they'd done.

The movie is rated PG for crude humor and mild peril. I'm not a fan of the crude humor, but it was kept to a minimum. Unlike the first, I'd say this movie is safe for the entire family, and I really think the kids will love it.

No, Evan Almighty is not wall to wall laughs. But it is believably funny and an enjoyable hour and a half.
Posted by Mark Baker at 2:26 PM