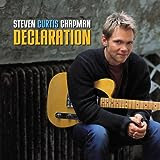 Stars: 5 out of 5
Pros: Honesty and fun mixed into one

Cons: The opening song is very dated.
The Bottom Line:
So many great songs
One song's reverence doesn't work
But that's only flaw


I Have a Declaration.  I Still Love This CD

Steven Curtis Chapman is a household name in Christian music circles. Since he first appeared on the scene in the late 80's, his projects have been greeted with enthusiasm and awards year after year. Heck the running joke at the Dove Awards (the Christian equivalent of the Grammys) is that they should just rename them the Stevies since he wins so many of them.

And there's a reason he's so popular. His releases are great. I rush out and buy them as they come out, Declaration being no exception. And even though this is his eleventh studio album, it's wonderful.

Steven is an interesting mix as an artist. Some of these songs rock. Then there are the slower, quieter ballads that would feel more at home in the adult contemporary market. Yet he is able to easily flow through all of these styles and make the disc seem like a whole unit.

The CD starts out rocking with the anthem "Live Out Loud." It's a fast, catchy song that just begs you to sing along. Which is appropriate since the song is talking about not holding back but sharing the hope we have in God. Yet the song does have a major strike against it. In an effort to include a pop culture reference, the first verse analogy is about winning money from Regis on "Who Wants to be a Millionaire." Even when the disc came out in 2001, I knew this song would be dated fast. Don't get me wrong, I still love it, just after that first verse is finished.

Another rocking track is "See the Glory." The electric guitar is heavy here, and the song moves. I always smile listening to this one. The idea behind the song is that, as Christians, we are too quick to settle for the mediocre we know instead of all the incredible stuff God wants to offer us. At the time the CD came out, it was nicknamed the Gameboy song. Why? Well, one of the lyrics is "I'm playing Gameboy standing in the middle of the ." He takes that idea and plays with it at various times in the music as well. My favorite of these is after the bridge where he starts playing the melody with a tinny Gameboy sound to it before dissolving into a full orchestra sound. It's a neat effect and helps drive the point of the song home.

Thanks to the biography Through Gates of Splendor, many Christians are familiar with the story of the 5 missionaries who gave their lives trying to reach an isolated tribe with the gospel back in the 60's. Heck, the story was even turned into the movie End of the Spear last year. While writing for this album, Steven had the chance to meet one of the missionary's sons and Mincaye, one of the killers who has now turned to God. The impact that meeting had led him to write the song "No Greater Love," a song about sacrifical love. This is a guitar driven ballad. It works without knowing the story but is even more powerful if you have the story in mind. The song fades into Mincaye doing a praise chant in his own language. A translation is provided in the linear notes. Over all, it makes a powerful song.

Several of Steven Curtis Chapman's friends faced trials while he was working on this project. His attempts to deal with the pain lead to several great songs on the disc. The first is the mid-tempo "This Day." The second track on the disc, it reminds us that the God we praised yesterday when everything was going well is the same God who is there for us during the hard times of today. It's very acoustic guitar heavy and is perfect for the adult contemporary audience.

My favorite song on the disc is "God is God." At first glance, the chorus is obvious. "God is God and I am not." But when you really listen to the verses, you get the big picture. This song represents the faith in God when you have hit rock bottom. Like the Biblical Job eventually learned, it's a declaration that we will never understand God or the pain He has allowed into our lives, but we can still trust and worship Him. It's a powerful song when you truly listen to it.

"Bring it on" is appropriately rocky. It takes trials head on, almost daring them to come. And, well it's not because Steven is looking forward to them, it is because he knows God has a purpose in everything. It's a very mature attitude I don't always have myself. The song uses electric guitar and keyboard effectively. The driving rhythm really drives the chorus home.

The disc ends with two quiet ballads. The first is "Carry You to Jesus" a promise to be there for a friend during the pain even if he doesn't know what to say. It's a moving confession of inadequacy.

Finally comes "Savior." Easily the slowest song on the disc, it is also hauntingly beautiful. Strings overshadow the guitar quite often as Steven sings of his need for a Savior. It's a nice quiet way to close out another great set of songs from a great artist.

The six years since the disc came out haven't dampened my love of Declaration. There is a great mix of the fun and the series, the rocky and the slow. Steven Curtis Chapman brings it all together beautifully. This is a disc you need in your Christian music collection.