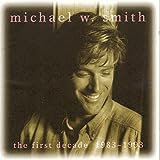 Stars: 5 out of 5
Pros: 15 songs sure to bring back memories

Cons: Dated sound on many of the songs
The Bottom Line:
Many classic songs
Proves why Michael's popular
From start of career


A First Decade of Hits and Timeless Classics

Once upon a time, I didn't automatically buy best of CD's of artist I liked. I had a hard time justifying the money for a collection of songs I already had elsewhere. This is one of those collections that I put off buying for years. But those new songs kept calling to the collector in me. Eventually, I gave in and bought The First Decade. And I still love listening to it.

Michael W. Smith is probably not a household name outside of Christian Music Circles. Yet odds are that anyone who grew up in the 80's or early 90's have heard a couple of the songs on this disc. "Friends" was a staple of graduations for years. This classic song is bittersweet. It deals with the pain of close friends moving away yet the hope that memories and God's promises still bring. It really is a simple song with the focus being on Michael's vocals and piano playing. Yet the sentiment has captured the hearts of millions. It was the first hit from his first release, yet it is still the one he is most associated with.

"Place in this World" is the other extremely famous song on this disc. It was a huge crossover hit in the early 90's, and the music video was very heavily played on MTV for a while. It's another quiet piano ballad about struggle, but this one is about the struggle to make a name for yourself. I was in high school when this song first came out, but there are days I still identify with the struggle expressed I the lyrics.

While the rest of the songs here aren't as well known, they are wonderful. Michael W. Smith has always been a pop star, and that is reflected in these songs. Unfortunately, he's also always been a product of his time. That means much of what is here sounds like it came from the 80's. It's heavy on the synthesizer at times. The lyrics themselves are still timeless, and I love the songs, but for those who don't already love the songs, some may take a few listens to appreciate.

But it is worth the effort. "Give it Away" talks about the importance of showing love. "Go West, Young Man" is a fun upbeat pop number that reminds us to flee from temptation. "Secret Ambition" is a rocker about Jesus' true ambition when He was on earth. "Pray for Me" is another song with the same theme as "Friends," but I've always liked this one better. And yes, we did sing it at camp a couple years around the campfire on the last night. And I can't forget "Great is the Lord," another classic from his first release, that is still sung in churches to this day.

There were a couple songs I was really glad to see here. I've always been a fan of the pop ballad "Rocketown." I'm not quite sure what appeals to me about this song about a missionary, but I love it. Of course, since Michael would use it as the name of his record label a few years later, I'm really glad it was included here.

The other song I love is "I Am Sure" from his overlooked second project. While the song starts off talking about the uncertainty of life in our world, it then reminds us that our future is secure in Christ.

Since Michael W. Smith is a piano player, all the songs are heavy on the keyboard or piano. Of course, plenty of other musicians get involved, including guitar, drums, and strings on a song or two. Frankly, it's pretty standard pop stuff. Since the disc starts with his most recent songs and goes back in time, you can watch his style progress (or is it regress?) from disc to disc.

So what about the two new songs that were enough to talk me into buying the disc? They're both slow ballads. And, while I love the first, the second never really has grown on me.

The first is "Do You Dream of Me?" It's a tender love ballad about the connection of a couple who has been together a while but is still very much in love. Michael's good friend Amy Grant helps with the background vocals (if you listen, you'll find her on several of these songs in fact) and the harmonies they create are beautiful to listen to.

The second new song is "Kentucky Rose." This song is a tribute to a country preacher who spent his life giving everything for his congregation. I'm sure this was written about someone in particular, and if I knew the story, it might mean more to me. As it is, I've never connected with it. Appropriately enough, this song features a harmonica, organ, accordion, and mandolin, which really gives it a country church feel.

Unfortunately, Michael W. Smith's last couple releases haven't been a good as his classic stuff. But The First Decade shows just how good he really was in his prime.