Music Review: So Much for Substitutes by downhere 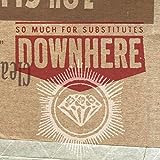 Stars: 3 out of 5
Pros: A handful of outstanding tracks...

Cons: ...lost in the sameness of the sound.
The Bottom Line:
There are some good tracks
But most of it is just bland
So it's weak downhere


Who Substituted for downhere?

downhere's 2001 self-titled debut was strong. With some insightful lyrics and a soft rock via coffeehouse sound, it stood out from many other CDs in my collection. Their third CD is the strongest from them yet. But then there's So Much for Substitutes. Can we say sophomore slump?

After their debut came out, the members of downhere talked about their desire to capture the harder rock sound of their live show. That effort is this CD.

Now I'll be the first to admit, I'm not a hard rock guy. I grew up listening to inspirational and adult contemporary music, so my rebellion has been pop and soft rock. Occasionally, I find a rock band I enjoy. But it takes a lot. And this effort just doesn't cut it.

Now don't misunderstand. There are some great songs here. I love the opener, "What it's Like." It starts off with a strong guitar strum before dissolving into a complete hard rock anthem. The chorus is extremely catchy and the reminder that Jesus can sympathize with our struggles here on earth because He was one of us takes an unfamiliar path. Then there's the bridge. The "Whoa's" are easy enough to sing and make for a fun crowd echo during concerts.

The title of the CD is taken from a lyric of "Stone." A slightly slower rocker, this song is a song of commitment to God because He is the only thing that offers true value. The chorus goes further by expressing a willingness to be shaped by Him because "All Your stones become Your diamonds." Very rare are tight harmonies in rock music, but vocalists Marc Martel and Jason Germain can create some great ones, and they do so here.

"Starspin" is another concert crowd pleasure. The pace is fast, probably the fastest on the disc. Again, guitar dominates the music. And they use some funky rhythms to really catch your ear. The lyrics talk about the glory of God expressed in nature with the first few lines being an almost direct quote from Psalm 19.

They slow things down for the final track. "Last Night's Daydream" combines keyboard and guitar in a way that captures the sound from their debut. The lyrics are a poetic expression of difference the presence of God can make and the longing to experience it more fully.

Like their debut, this CD also includes a bonus track. Ironically, this is my favorite song on the disc. "Home" really captures the softer feel of their debut. Its piano based with acoustic guitar. It's a prayer for a constant reminder not to get too comfortable here on earth but follow God's leading home.

If the rest of the CD were this strong, I'd stop here and tell you to buy it. The problem is, the rest of the songs begin to sound the same after a while. Driving guitar and drums dominate with hardly any variety of speed. Even now, four years later, many of the rest of the tracks don't distinguish themselves in my mind. The words are equally forgettable, and I'm a lyric man first and foremost.

Because there is so little to distinguish one song from another, I tend to skip this CD most of the time, which is a shame because I really do love the songs I highlighted. So Much for Substitutes is recommended only for fans of downhere. If you are new to the group, try some of their other projects to see how great they can sound.