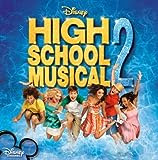 When I discovered High School Musical, I'll admit I fell for it completely. Within a couple weeks of first seeing it, I had the movie and the soundtrack. I wasn't going to let the sequel pass me by like I did the original, so I bought the High School Musical 2 soundtrack even before I saw the movie. It took quite a few listens, but I am enjoying it.

The first thing I noticed is 's voice. I'd heard plenty of times that Zac Efron hadn't done his character's vocals in the first movie. If I doubted, I'm a believer now. sounds so different here. Now this isn't to say Zac can't sing. I think he does a great job. But it took me a little while to get used to his new voice.

The other difference is the production. This CD is teen pop and proud of it. While the first soundtrack had a more natural feel to it, this CD was obviously produced with radio play in mind. Everything is slick and polished. For my taste, it's overproduced at times, but that's a minor issue and something else I've gotten used to as I've listened to the CD.

The soundtrack starts and ends with two group songs, "What Time is it?" and "All for One." These are both fun, upbeat pop songs. The first one is about the start of summer vacation. I can easily picture the movie's fans singing it when June rolls around next year. The second is this movie's final song and tries to be "All in this Together" from the first movie. It's not, but it's not a bad song in its own right.

The other big group number is "Work This Out." As the characters try to get a handle on the loads of work they have to do, they sing this song. It's catchy and fun to sing along with.

Easily my favorite track is the Chad/Ryan duet "I Don't Dance." It's a hip hop song with touches of jazzy swing, especially on the bridge. And yes, that combo really works well. This is the song I find myself singing the most, and I really don't mind. I also find myself bopping along to it. Yes, that means I got some strange looks on the freeway coming home tonight.

Another standout is "Bet on it." This song is highly polished boy band rock. They really mix it so that sounds like he's singing with others even though no one else gets vocal credits. The song does a good job of expressing everything that has gone through in the movie and really does fit his mood at that point.

and Gabriella get a couple nice ballad duets, and again their harmonies are excellent. Gabriella again gets a sad song with "Gotta Go My Own Way." While it is a break up song, it shows that she is a stronger person then she was in the first film. I especially like "You are the Music in Me," which and Gabriella sing together. While a love ballad, it's got a nice beat and it's not overly sappy, just sappy. It starts with soft piano and builds into a full orchestra pop ballad. The song is actually on here twice, the second time being a faster dance pop version done mainly by villainess Sharpay. That version doesn't do much for me.

And that brings up my biggest complaint with the soundtrack - Sharpay. As with the character, her songs are over the top and annoying. I get what "Fabulous" is supposed to do (show how spoiled the character is), but I really don't like the song. I feel like slapping Sharpay by the time it's over. Nothing against Ashley Tisdale, who plays the character, it's the song and character I can't stand.

The one exception to this rule is the bonus track. "Humuhumunukunukuapua'a" (I think I got that right) was never actually in the movie but references are made to the song several times. It's supposed to be a song that Sharpay and Ryan have put together for a talent show. Frankly, I would have loved to see them perform this. It's very funny song about a prince turned into a fish by a curse and the woman who wants to change him back. It's got a nice Hawaiian feel to it and you can hear the ukulele.

Even though the High School Musical 2 soundtrack doesn't quite measure up to the first movie's soundtrack, there are some fun songs here that will have me pulling the disc out to listen to again.