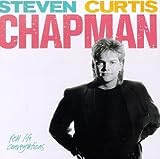 Cons: Light 80's production
The Bottom Line:
Steven's sophomore release
Not one of his better known
But worth tracking down

For two decades now, pop/rock artist Steven Curtis Chapman has been a force to be reckoned with in Christian music. He's won so many Dove (Christian equivalent of the Grammy's) and other awards it's not even funny. And most of his releases are huge successes.

I definitely count myself among his fans. I've been listening to his stuff since the early 90's and love almost every project he's released. I say almost because, like every artist, there are some CD's I don't care for and don't listen to that often. That's the case with his debut, which isn't that interesting musically. Real Life Conversations was his second release, and it's one I still pull out often and enjoy.

The CD came out in 1988. Yes, that does indeed mean that some of the production carries an 80's feel. But it isn't as overwhelming as you might think. Many of these songs could be recorded again today with very few changes.

The first song is "Faithful Too." It's a fun, toe tapping start to the project. Behind the fun music is a serious reminder that we need to seek God in both good times and bad. The drums and bass guitar are strong here, drowning out Steven's own guitar work. But it works for this song.

Slowing things down slightly is "Tuesday's Child." Steven's electric guitar is more pronounced on this soft rock track that celebrates grace. It takes the old children's rhyme (Monday's child is fair of face/Tuesday's child is full of grace….) and applies it to Christians. I hadn't heard the original rhyme that often before getting this CD, but I really like how he pulls out that one phrase. Granted, this isn't the original meaning, but it works.

"For Who He Really Is" is the first of four ballads on the disc. Like everything else, it is guitar based. And it takes aim at hypocritical Christians who claim to have all the answers but don't show it. Steven takes no prisoners on this song, especially on the bridge where he goes from sharing hypothetical stories to applying it to all of his listeners. It's rather convicting.

"His Eyes" is another of the ballads, this time incorporating strings with the guitar. It's a tender song reminding us that, even though God is big, He still knows and loves each one of us. With just the guitar and strings, it's a quiet, uplifting song.

"My Turn Now" is another song meant to challenge the listener. It starts with an a capella version of the chorus before the instruments come in. The pop melody is very catchy and the drums are a little more pronounced again. The song talks about our need to surrender to God because of all He has done for us. The challenge of the lyrics can get lost in the fun of the song, but if you really stop and think about what you are humming along with, it hits you hard.

Real Life Conversations is over 20 years old, but I still love listening to it. If you are a Steven Curtis Chapman fan, don't miss this gem from early in his career.