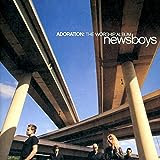 Stars: 5 out of 5
Pros: Songs of worship that are fun to hear and sing

Cons: Not all 10 tracks are new
The Bottom Line:
A great praise CD
With several originals
Plus a few classics


Will Have You Singing "Hallelujah He Reigns!"

I am usually rather ambivalent about the Newsboys. Frankly, I'm not sure why. I have mostly enjoyed their music I have heard. But I rarely go out and buy their CD's. I made an exception for Adoration, and I'm very glad I did.

For those unfamiliar with the group, Newsboys is a Christian rock band. What sets them apart from many others is their country of origin, . I don't find their rock sound that far outside the mainstream. But you can't mistake lead singer Peter Furler's vocals because of his wonderful accent.

This 2003 release was this first entry in the every expanding worship subgenre. Especially during that time, it seemed like everybody was doing a worship project. Okay, so I'm exaggerating slightly. But only slightly.

Many of these projects featured lots of covers of worship songs and a few original songs. That's the first thing that sets this disc apart from the others. There are only two covers of non-Newsboys songs. The first of these is "You are my King" (Amazing Love)." The song gets the slower feel we are all used to singing at church. There are quiet guitar strums in the background that crescendo and the song progresses. Lyrically, the song talks about the amazing sacrifice Jesus made for us and our response to it.

The other cover is "In Christ Alone." This one starts out with piano but adds guitar and drums as the song progresses. This modern day hymn has become quite well known over the last few years. They do all four verses, which walk you through the gospel story. My favorite is the final verse which applies all that theology to us today.

And that's it. The other eight songs on the disc are Newsboys originals. Of course, this is slightly misleading. "Lord (I Don't Know)" and "It is You" originally appeared on both originally appeared on the Newsboys release Thrive. The versions here are both recorded live. Frankly, you can hear the audience, but they never overwhelm the group. But are typical Newsboys rockers and sound great here.

Then there's "Take My Hands (Praises)." A version of this song originally appeared on their 2000 Best of release. While this song has the same chorus, the verses are all new. I absolutely love this song, which is a good thing since I still get it stuck in my head. It's got a catchy beat and rhythm. While the verses talk a little about surrendering to God, the chorus is pure praise for what God has done for us.

Okay, so by the time we subtract all these songs, we're down to 5.5 original songs. (I'm counting the verses of "Take My Hands" as half a song.) Considering some other worship CD's, this is still a pretty good ratio.

And it helps that these new songs are great. I still absolutely love "He Reign." It's a simple idea. The song talks about Christians all over the world declaring with one voice that God reigns. The song starts off with mainly drums and light keyboard, but the other instruments come in on the chorus.

I also love "Great is Your Faithfulness." And no, this has nothing to do with the classic hymn. While that song talks about God's faithfulness in creation and daily life, this one really focuses on God's faithfulness to sinners because of His mercy. It borrows its verses from Psalm 139. The result is a great song that reminds me anew of how great God is.

Fittingly, the final song focuses on the never ending praise session we'll have in Heaven. It seem appropriate to me to remember as the disc closes that this is just a sample of what we will experience for all eternity. I can't wait.

The band is assisted by a choir on a couple of the songs. They never overpower the instruments of Peter's singing. I find it helps the songs.

My favorite feature of the disc is actually in the booklet. They include the guitar chords to seven of the 10 songs. The only ones not included are "In Christ Alone" and the two live songs from their last project. I don't think I've ever seen anyone else do this before. I wish I were a better guitar player because I'd love to be able to play some of them.

Some people view projects like Adoration as just jumping on the latest bandwagon. And while I won't deny that that could be part of the motivation, the result is still a wonderful collection of songs that will focus your attention anew on God.