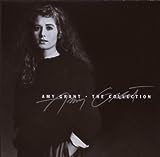 
"Stay for Awhile" and Listen to These Classic Songs

Amy Grant's career can be divided into two halves. There is the blatantly Christian part and the crossover Christian/pop part. Whether by accident or design, her first "best of" release pretty much divides the two periods exactly in half. Since it came out in the 80's, we are talking about some dated music. But the songs in The Collection still hold a place in my heart today.

The disc starts out with the requisite new songs recorded to entice fans to buy the disc. "Stay for Awhile" has become a classic in its own right. The theme really hits home with its picture of old friends meeting again years later. It's got a somewhat dated sound, but not nearly as dated as the other new track, "Love Can Do." Could that song be any more 80's? The effects and keyboards really do date it. This song is about how love can ebb and flow in a relationship, but you need to stay and make the sacrifice for it to last. Like several other Amy songs from the era, this one is ironic given her personal life a decade later.

From here, we get into the classics. And I do mean classics. The songs are presented in reverse order, so you can really follow how her career has evolved. Up first are two definite 80's pop/rock tracks from Unguarded. "Find a Way" was a huge hit at the time, again a song about love, but in this case a song about love overcoming hurts. While not as big a hit, I have always enjoyed "Everywhere I Go," probably because I love Psalm 139, which inspired it. It takes the passage about God always being with us and updates it to today's language.

Of course, there are obvious selections here. "Angels" and "Thy Word" from Straight Ahead and "Sing Your Praise to the Lord," "In a Little While," and "El Shaddai" from Age to Age were all obvious choices. While some have faded from popularity now, they were all huge hits at the time. And "Thy Word" and "El Shaddai" are still sung as praise choruses in some churches today.

Also an obvious choice is "My Father's Eye." This song was Amy's first mega hit. This tender ballad is still as powerful today as it was then. It's a simple song asking for God's perspective on situations and people. Like all of Amy's early work, it's got a simple production, keyboard and guitar with light drum backing. It's production does belay it's 70's roots, but it's not too bad.

There are also some interesting choices here. "Emmanuel" shows up from A Christmas Album. Granted, it's a fun song and works the rest of the year, too, but this still surprised me. Also surprising is "Too Late." Don't get me wrong, I love the song. But I have never understood why they chose the live version instead of the studio version. One potential argument for including both of these is having a song from every single release on the disc. However, that falls apart since there is no song from her self-titled debut.

One song I am thrilled to have included is "I'm Gonna Fly." This quiet song from her In Concert albums is a usually overlooked gem. I just love it because of its celebration of life and Heaven.

The disc ends with "Ageless Medley." While several years old, it was previous released only to radio. Produced after Age to Age came out, it's a 6 minute medley that combines quite a few of her hits. This isn't just a remix but a new recording since most of the songs sound slightly different from their original recordings. This is also the only appearance here of anything from her debut since "Old Man's Rubble" is included. The songs flow together well and it makes for a great disc closer.

There are some truly classic songs on this disc. While some show their age more then others, any fan of Christian music from the 70's and 80's will love the memories The Collection brings back.