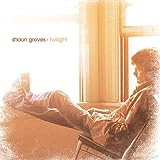 Stars: 5 out of 5
Pros: Wonderful lyrics
Cons: Takes a few listens to get into
The Bottom Line:
Slower overall
But the lyrics still shine through
Give this one a chance


Shaun Slow Things Down for His Second CD

When Shaun released his debut CD, it took me a little while to adjust to his soft rock style since I don't often venture into that territory. But by the time Twilight came out two years later, I had really grown to love that first effort and was looking forward to more of the same.

Based on the first track, it does sound like a stylistic follow up to the first CD. "See You" is a fun rock song filled with driving drums and electric guitar. The song talks about the struggle to find God in the every day despite the daily reminders of His presence. It's not as strong lyrically as some of Shaun's other efforts, but it is a fun song.

But it soon becomes clear that this song is the exception, not the rule. The majority of the songs are slower this time around with more of a pop feel. There are several ballads as well. This threw me off at first, and I wasn't sure what I thought about it. But the more I listened to it, the more I have grown to love this CD.

The reason? The lyrics are still honest and strong. Shaun wrote every song himself, and he poured himself into them. Every time I listen, the truths of the songs drive themselves into my heart again.

Take the title track, for example. "Twilight" is about the struggle between the new man and the old man that every Christian goes through. Not a new topic. But he paints such a beautiful word picture:
"Like the sky before the dawn
While the night is holding on
Sun and moon together in the gray
So my soul is shared by two
The worst of me, the best of You
Saint and sinner mingled in my veins"
The music on this song helps set the mood. It opens with piano which dissolves into strings. The song is slow and contemplative, so by the time Shaun is praying for morning, it almost feels like you are eavesdropping on the personal conversation with God.

When looking at the song titles, I expected "Jesus" to be a praise song. Instead it is a song of conviction. The song starts out very quietly with Shaun singing the chorus backed up by strings. Piano comes in once we get to the first verse. The song expands on Jesus' statement "If you did it for the least of these, you did it for Me" by showing just who some of the least of these might be. From a waitress to an addict, a foreigner, or a little child, just about everyone is covered. It's hard to listen to this song and not think about what I should be doing for others instead of myself. (And yes, that's a good thing.)

Shaun becomes his most honest with "To be Honest." (Shocking, I know.) The slowest song here, it is a pretty piano ballad. It would have been better without the drums all the way through (they work well for the bridges, however). The song is a confession to the way he covers up weaknesses while on stage performing. Again, I feel like I'm hearing something meant to be private, but it moves me to examine my own life.

"God of Us" was a favorite right off the bat. I always think of this song as a Christmas song, but in reality it goes through the entire redemptive story from Jesus' birth to his death and the coming of the Holy Spirit. It's a tender song accompanied by acoustic guitar and the strings that seem to be on all the slow songs.

But not all the songs are slow. There are several upbeat songs mixed in. Sometimes, it can create a bit of a jarring sensation. But they are equally as strong as the slow songs.

"One of Those Days" is a mid tempo praise song. It's a song that just revels in a good mood and praises God for it. The drums come in stronger after the first chorus and it really becomes a driving rock song.

By far the fastest song on the disc is "I Love You." This song starts fast and never slows down once. At times, Shaun seems to almost be screaming the words. While the chorus is overly simple (the title repeated several times), the verses are the powerful part. They promise comfort and help in the life of someone "living in your handmade hell." Based on the bridge, I think its one friend talking to another, but the words could easily be taken as a reminder of God's promise of unconditional love for His children. Either way, it's a fun song that will encourage your spirit.

When the CD was first released, it included several bonus tracks, basically a few of Shaun's worship songs from his first CD recorded live. Those were limited edition discs. Now, the disc just contains the last of those songs, "Here I Am." Still the live version, it's just Shaun and his guitar. A simple praise song of surrender, it's a good close to the album.

Those looking for the soft rock of Shaun's debut will most definitely be disappointed. But once you give it a while to sink in, you'll find Twilight contains the same honest and conviction lyrics that made that first project so great.