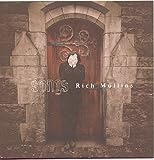 Stars: 5 out of 5
Pros: Great songs with timeless lyrics
Cons: No more songs from Rich
The Bottom Line:
Truly great music
From a much too short career
Great for Mullins' fans


Collection of Songs You Don't Want to Miss

Sometimes you don't know what you have until it is gone. I was never a fan of Christian music artist Rich Mullins when he was alive. I bought a couple of his CD's, but found some of the songs too weird for my tastes. I guess I just wasn't up for trying to decipher the complex poetic metaphors he used in his lyrics. Frankly, I still don't get all of them, but I enjoy the poetic nature of them now. But I did truly love some of his songs, so I was thrilled to get this best of collection when it came out in 1996. Sadly, it was released just a year before Rich was killed in an auto accident. And while Rich may no longer be with us, the Songs on this collection will be with us for a long time.

As with any disc of this nature, there are new recordings to get fans to buy it. Here, there are three new recordings, but only one new song. (Don't worry, it will make sense.) The new recording is "We are not as Strong as We Think we are." And this is a prime example of what can still drive me crazy with Rich's music. What exactly is this song about? I seem to remember comments at the time about this being a love song. If so, it's the song of a break up. Either way, the lyrics are Rich at his poetic best describing humanities strengths in one line ("Forged in the fires of human passion") and contrasting it with our weaknesses in the next ("Choking on the fumes of selfish rage"). And the constant reminder of the title works to put me in my place. Stylistically, Rich was firmly in the adult pop category, and this song is no exception. It's a mid-tempo song that is guitar and piano heavy with the occasional appearance of strings.

I remember when the CD came out I was shocked to find a new version of the classic "Sing Your Praise to the Lord" here. That song was a huge hit for Amy Grant in the early 80's. Turns out, Rich Mullins wrote it and he takes this opportunity to do his take on the song. It's not quite as fast as the original, but I love it just as much. Yes, it includes the classical feeling instrumental build up that makes Amy's version so great. What sets this version apart is a previously unrecorded bridge that borrows from the Psalms to remind us why we should be praising God.

The final new recording of the disc is "Elijah." This song first appeared on Rich's first release back in the 80's. And that version is fairly 80's, too. It gets a fresh arrangement. Frankly, I still prefer this one over the original. Again, the song is keyboard heavy with guitar and strings staying pretty much in the background. The song talks about his excitement to leave this world and get to Heaven. And while he didn't "Go out like Elijah/with a whirlwind to fuel my chariot of fire," I find it appropriate and melancholy that one of the final songs he recorded in the studio was this song. Maybe one reason I prefer this version over the original is that knowledge.

Over the course of his career, Rich Mullins sang many songs that were instant classics. It would be absolutely impossible to put together this collection without including "Awesome God." Filled with rich strings, this modern praise classic is just as great today was it was in 1988. It's got a driving beat that brings home the truth "Our God is an Awesome God." Even after having led this song in worship for years, I don't see how he gets all those words into the verses so effortlessly.

"Sometimes by Step" is an interesting song. The chorus of this song showed up first, then the full version with verses showed up on his next CD. The chorus part, usually called "Step by Step," is a worship service classic most Christians are familiar with. Not as many are familiar with the great verses, which are included here. Together, it's a song of commitment to God each step along the journey of life.

Rich played an instrument that very few people play any more, the hammer dulcimer. This is a string instrument that is hit like a percussion instrument. It shows up in several of the songs here. Most noticeably, Rich used it for a long introduction to "Calling Out Your Name." It also makes its presence known in "Creed," a musical version of the Apostle's profession of faith. And it shows up in the fun if convicting "My One Thing."

Speaking of fun and convicting, the disc includes "Screen Door." The song is completely a capella and has an infectious beat and catchy tune. The lyrics are based on the book of James and are an in your face reminder that our faith needs to be backed up by our actions. Yet it's got some fun word pictures in it. "Faith without works/Is like a song you can't sing/It's about as useless as/A screen door on a submarine."

While never reaching the giant status of some of Rich's other songs, I've always loved the last two songs included here. "Verge of a Miracle" is a song of hope, reminding us that God is always near.

"Hold Me Jesus" is one of my all time favorite songs. It's a song of surrender when you've hit rock bottom. It's got images of small faith and terror with the chorus crying out "Hold me Jesus 'cause I'm shaking like a leaf." I especially identify with the bridge, which confesses to fighting God just because of pride. The song is quiet and slow, making it an even better prayer. It's not even three minutes long, but it is powerful.

While I personally don't love every song on this disc, I can understand why each was included. They were all radio hits when released and represent some of Rich's best known songs.

And me? After Rich's death, I started to appreciate his music much more then I did while he was alive. I now own all his CD's. But this remains the one I listen to the most.

Any Rich Mullins fan will love having his best in one place. And any Christian music fan will recognize many of these great Songs stuffed full of timeless truth. This CD belongs in every home.