Music Review: So Far: The Best of Susan Ashton Volume 1 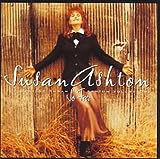 I always get suspicious when artists release a "best of" after only three or four CD's. Despite the fact that So Far claims to be "Volume One," Susan's career died not too long after this release. I really wish it hadn't.

Anyone who followed Christian music during the early 90's knows who Susan Ashton is. After several years as a backup vocalist, her star shot to the top after her strong debut CD. Her sophomore project was just as equally well received. Her third was closely followed by this compilation release. Her fourth CD was her last one in Christian music before she set out for the Country market where she released one CD before unfortunately vanishing.

Her crossover to Country was hardly a surprise to me. She was quite open about it being her first love. And you can hear bits of that influence in the songs on this CD. Guitar is definitely the most prominent instrument here, backed up by keyboards and drums. But there's the occasional twang, especially on disc opener "Here in My Heart" (which was later covered by Garth Brooks) or "." The glimpses of Country are brief, however. This is pop music first and foremost.

I will always connect Susan with metaphors on the familiar. Her discs are littered with familiar titles taken in a new way. Unfortunately, most of them didn't make it onto this disc. "" is an example that did. It takes the National Park and turns it into a picture that can sometimes grow between us and God. You'll note I didn't say original metaphors. There is nothing shocking about the song's lyrics. Yet I love them. The song is on the slow side with just guitar and drums on this one.

Another entry in that category is "In Amazing Grace Land." Okay, so maybe it's a bit of a stretch, but this is still an absolute favorite from Susan's career. This one is keyboard heavy and has a decided pop flavor to the fun beat. The lyrics marvel in God's grace and the fact that we get to live in "Amazing Grace Land."

Another favorite of mine is the disc opener. "Here in my Heart" captures my ears from the opening guitar chords. The drums don't even come in until the first chorus. This song talks about how, no matter what we do, we can't escape God. Well, that's the spin I put on it. It could be left open to describing the refuge we get from the love of a good friend, too. Often, ambiguous lyrics bother me, but in this case they don't.

Not at all ambiguous is "No One Knows My Heart." This slow ballad features beautifully picked guitar backing Susan's tender vocals as she sings about how she can fool people, but she can never fool God. She admits it’s a comfort and a challenge. I've always liked that honesty.

No collection seems to be complete without some new songs to sucker us long term fans into buying the disc. There are two of them here. First up is "Stand," a song of commitment no matter the trials of life. The song features a liberal amount of strings. They really add to the strength of this anthem, but it took me a little while to get used to it because it sounds unlike most of what she'd done before it.

The other new song, "Hide or Seek," fits into the metaphor category. Guitar heavy with some keyboard and drums, it sounds like classic Susan. Here, she sings about the decision to seek or hide from God's love.

Susan's last release in the Christian market was a decade ago, but I still miss her music. Her few releases are regular staples in my CD player. And So Far: The Best Of Susan Ashton Volume 1 will show you exactly why.