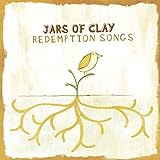 Stars: 5 out of 5
Pros: Fun modern rock take on some well known and forgotten hymns
Cons: None
The Bottom Line:
Hymns get modern sound
Reminds us of great lyrics
Fun to listen to

Over the years, many Christian artists have released hymns projects. This trend took a different path in the last few years with many artists releasing well received worship projects. In keeping with that great tradition is Redemption Songs from Christian rock/pop band Jars of Clay.

Instead of releasing a straight hymns or worship project, the band decided to put their own spin on the tradition. First, the familiar hymns included are given the Jars twist. While you might recognize the words, the song is guaranteed to sound different from the way you sing it in church. The majority of the disc, however, is made up of old hymns forgotten by the modern church. And there are some true gems on the disc. All of these songs get the Jars spin as well, with some getting completely new music written by the band. All of them fit the group so well I had to look in the credits to make sure that they didn't write some of these words.

The CD opens with "God be Merciful to Me." This song comes from the 1912 Psalter and is based on Psalm 51. It's got a bit of a playful feel that makes for a great opening. The Psalm is probably one of the most famous pieces of repentance in the Bible. Yet the serious nature of repenting from sin fits well with the music. The drums keep the song going while the keyboard and guitar add the fun. The lyrics focus on how great God is and balance that with the need to repent.

Heavy drums introduce us to "God will Lift up Your Head." An old hymn translated into English by John Wesley, Jars gives the song completely new music. It's most definitely rock here with the driving drums on the chorus being complimented by keyboard and heavy guitar. It compliments the words of encouragement so well. The song calls for us to surrender our worries to God and let Him lift up our heads.

John Newton is most famous for writing the classic hymn "Amazing Grace." Jars of Clay has included one of his lesser known songs here, "Let us Love and Sing and Wonder." And it's a gem. A bit of a slower song, the drums take a back seat to the guitar here. The songs calls for us to praise God because of all He has done for us. Yep, a similar theme to "Amazing Grace," but it is a great new take on the subject.

"O Come and Mourn with Me Awhile" offers a contrast. While the lyrics are a sad reflection on the crucifixion that would be appropriate during a Good Friday service, the song is upbeat and fun to listen to. For Good Friday meditation, it isn't appropriate as arranged here. But since Christ's death was ultimate great for us, I think the contrast between the somber lyrics and the upbeat music works well.

"" is another old hymn given completely new music by Jars of Clay. It's a quiet song that even includes some violin mixed in with the guitar. This is the slowest song on the disc, which fits the lyrics asking for refuge from the troubles of life. I love the admission of sin and weakness. This really is a song begging for God's peace instead of a celebration of it.

As I mentioned earlier, not all the songs are unfamiliar. They provide a fun rock version of "I Need Thee Every Hour." The melody and lyrics are exactly the same as has been sung in church for years, but song has been sped up. It most definitely still works as a song of surrender, but the new arrangement allows it to catch our attention again.

Sometimes, hymns projects take on a country flavor. While Jars of Clay definitely avoided that trap (I really don't like it when artists do this), they do head down that road slightly on "I'll Fly Away." Since this is mainly done with the vocals, it works. The guitar and drums help the two styles mix well together.

They also add a side of urban to "Nothing but the Blood," which features The Blind Boys of Alabama. While keeping the words, it's a lot more funky then we normally sing in church. Still, it's lots of fun to listen to a sing along with.

The band almost seems to leave their rock side behind with "It is Well with My Soul." Definitely a guitar heavy track, the tight harmonies sound great. While it sounds good, it is slightly out of place on this rock focuses CD.

The disc closes with "They'll Know We are Christians by our Love." The song is in a minor key and has a focus on keyboard with light drums and even some banjo. The result is an absolutely haunting close to the disc.

Over the last decade, many churches have starting singing fewer and fewer hymns in favor of modern praise choruses. This CD proves that hymns can still sound fresh and modern if done correctly. The lyrics provide some theologically rich food for thought. Most importantly, the disc is incredibly fun to listen to. Jars of Clay made a true winner with Redemption Songs that I will listen to for years to come.