Music Review: Almost There by MercyMe 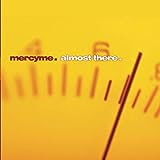 Stars: 4 out of 5
Pros: Many great songs
Cons: Similar sounding songs, "Bless Me Indeed"
The Bottom Line:
Breakout compact disc
Debut that put them on map
Not their best but good


"I Can Only Imagine" Where MercyMe Would be Without This Debut

Like anyone who follows popular Christian music, I had heard of MercyMe not too long after this CD debuted in 2001. With the meteoric rise of the single "I Can Only Imagine," everyone was taking note. But I'm not a follower. If something is an overnight success, I often take a long time to warm up to it. That was the case with Almost There. I put off getting it for two years. When I did, I quickly became a MercyMe fan.

MercyMe is a pop/soft rock band made up of five guys. You've got the usual keyboard, drums, and guitar in the makeup of the main members. But the blending of the pop and rock makes for a fun listen. And their words are great.

The CD starts out with the mid-tempo "I Worship You." It really sets the tone for the rest of the disc since there are several worship related song on the disc. It's on the pop end of the spectrum with a fun syncopated rhythm to get you hooked on the song.

The worship theme continues on such songs as "How Great is Your Love," which celebrates God's love for humans. "Call to Worship" is a soft rock worship song that reminds us of all the reasons, both in nature and in our own lives, to worship God. It's got a catchy beat and fun melody.

As with many Christian CD's, there are also songs intended to challenge. The chorus to "Here Am I" is taken from Isaiah 6, but it gives the song a modern twist. It points out all the people, both near and far away, who haven't heard about Jesus. Then it hits with the chorus and God's call to action. It's hard not to be convicted.

"On My way to You," from which the disc gets its title, is a song about the struggles to follow God on a daily basis. It's an honest plea to be more like God.

But as I said, the most familiar song from this disc is "I Can Only Imagine." One of the slowest songs on the disc, this ballad tries to picture just what it will be like to get to Heaven. It really brings the wonder of eternity to life in a way that few songs have in recent years as it considers just how we will react to the wonder of experiencing God's glory for the first time. The song starts quietly with piano and strings for the first verse and chorus, but adds the usual drums and guitar as the song progresses.

As much as I love this disc, it does have a couple of flaws. The first is the song "Bless Me Indeed." When this CD came out, the book The Prayer of Jabez was extremely popular, and this song takes is chorus from the verses in the Bible that were the basis of the book. I'm not looking to get into a theological debate here, but I have serious problems with asking for blessings when Jesus promised difficulty. I know the verses and chorus try to give it a different meaning, but that's what I get from it. Anyway, to make matters worse, this is the catchiest song on the disc, meaning it's the one I'm likely to go around humming all day.

The other issue is the style of the songs on the disc. There is strong drums, heavy guitar, and light bass and keyboard in the background. There are a few exceptions, but most of the songs are mid tempo. As a result, everything starts to sound the same after a while. I can listen to some CD's for days on end, but I find I grow tired of this one after only a few listens.

Still, I pull it out quite regularly for listens. There are some great songs on here and they are presented in a fun to listen to manner. Almost There was a strong debut that introduced Christian music fans to five talented guys and started a great career.