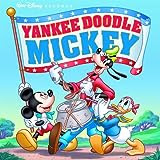 
A Patriotic Collection for Your Kids.  Gorsh!

There are times I wonder what I am thinking when I buy stuff. Or even if I am thinking. Take Yankee Doodle Mickey for instance. It's a collection of patriotic songs put out by Disney. Yes, I like patriotic music. Yes, I like Disney. But I am not a kid, and I don't have any kids. Yet somehow, I wound up with this disc. And you know what? It's not really that bad.

The disc contains ten standards of American patriotic music. Most of the tracks are extremely short. Seven of them are under two minutes and the longest is two and a half minutes. Yet none of them are truncated. They may be short, but I don't feel like I'm being cheated. Since the entire CD is under 20 minutes, it does seem like they could have found something to add to lengthen the CD, however.

Two of the tracks, "You're a Grand Old Flag" and "Armed Forces Medley" feature Mickey, Goofy, and Donald. A member of that trio occasionally solos but mostly they sing with the children's chorus that sings on the majority of these songs. These two songs also feature the only bits of dialogue, and they're pretty small, especially on the first song. These characters introduce the branches of the armed forces in the medley before everyone sings their anthem, which is a nice touch to help kids put the song with the branch.

The other eight tracks are only singing. Most feature a kid's chorus and an orchestra. These are straight up, simple arrangements. Nothing fancy to catch your ear, but they are fun none the less.

There are two exceptions to the rule. A male chorus does "The Battle Hymn of the Republic." That choice works very well and the song sounds great. The trumpets in the background certainly help. They return for ", the Beautiful" and do an awesome a cappella version. I can't help but wonderful if both these tracks are from some Disney attraction. They sound like they could be.

On the kid's tracks, one person handles the solos. Her name is Molly Ringwald. She sounds like a kid most of the time. The only exception is "This is My Country" where she sounds like an adult trying to sound like a child, which is a bit distracting. Either way, she does a fine job on her other two appearances, "God Bless " and "Star Spangled Banner."

Frankly, there are a couple songs here I don't have on my other patriotic CDs. "You're a Grand Old Flag" is a fun, upbeat song celebrating our flag. I love the minor key of the march "When Johnny Comes Marching Home." And I have always had a weak spot for "Yankee Doodle." They do several verses here with some unnamed adult leading them. It's quite fun.

I must admit, I don't pull this one out too often. It's aimed at kids and I can't get away with listening to it very often. But when I do, I enjoy it. Yankee Doodle Mickey is a CD that kids will really enjoy and their parents won't be too annoyed hearing over and over again.