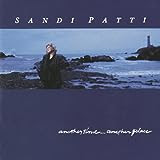 Pros: Great songs of praise
Cons: Some dated production in some tracks and a couple weak songs
The Bottom Line:
A couple weak tracks
Don't overwhelm the great ones
One of Sandi's best

During the 80's, Sandi Patty could not be touched when it came to the genre of inspirational Christian music and with good reason.  The lyrics were great, the music was good, and her voice is outstanding.  While her career stalled in the 90's, Another Time...Another Place was still Sandi at her best.

Overall, I consider this a melding of Inspirational and Christian pop.  It's not quite full pop and the focus of the lyrics is worshipful before worship was the in thing to release.  This release does tend a bit more to pop than some of her others, and I enjoy it for that.

Another thing that still sets Sandi's music apart is that she used orchestras and never fully got caught up in trying to imitate the styles of the day.  While you can certainly tell some dated elements like keyboard and drum machines in some songs, they are not the prominent feature.  You can't get away from the 1991 release date, but the entire disc isn't screaming it at you with every beat, which is nice.

Things start right off with the upbeat "Unto Us."  Based on Isaiah 9, the song could easily fit on a Christmas CD.  It's one of the most upbeat songs on the disc, and also the most dated production wise.  But it's still so much fun you can't help but smile as you sing along.

There are two duets on this disc, and the first of them is the title track.  "Another Time…Another Place" became one of Sandi's biggest hits thanks in part of Wayne Watson.  Of course, the two do an amazing job of blending as they sing about the joys coming when we reach Heaven.

Amy Grant joins Sandi on "Unexpected Friends," but this duet is much more subtle since Amy just sings background vocals.  Still, if you know to be listening for her, you can definitely hear her back there.  This isn't one of my favorites on the disc.  The idea behind the song is fine since it talks about those who help us out when we need it most.  It's just never quite connected with me.

There are another couple songs I'm not that fond of here.  "For all the World" is an attempt to honor those who sacrifice to share the Gospel around the world.  I get that.  And it calls on God to help us do that.  But again, the songs just doesn't work for me.

Then there's "Willing to Wait."  I actually do like the song, which is about waiting patiently for God's timing.  But the song uses Noah as a lesson in patience.  I can see it, but I still think they could have done better.  Again, I do like the song, so it's minor.

And most of the songs I really do love.  "I Will Rejoice" and "Rejoice" are classic Sandi Patti.  They're songs of pure praise with an orchestra backing and a fun beat.  You can't help but worship along as you listen.  "I Lift My Hands" is a slower song, but the honesty of the lyrics is just awesome.  And the anthem "Who Will Call Him King of Kings" is a great song about the resurrection.

My favorite from the disc has to be the slower "I'll Give You Peace."  Sung from God's viewpoint, it's a great reminder that He is also with us to help us through our trials.  The strings are great in the background of this slower number.

Right behind that song is the closer.  "O Calvary's Lamb" is the slowest song here, but the reminder of who God is and who we are is great.  And the slower tempo allows Sandi's amazing voice to really shine.

Even over 20 years later, there is still so much I love about Another Time...Another Place.  It's not among my favorite Sandi Patty releases, but every time I pull it out, I am reminded just why she was so popular 20 years ago.