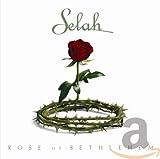 Pros: Wonderful arrangements of classics and great new songs
Cons: I didn't find it sooner
The Bottom Line:
Worshipful Christmas
Already a favorite
You need it this year


I'm So Glad I Found Selah's Rose of Bethlehem

Last year, I was in the choir at my church, so that meant I was part of the Christmas program.  During our final rehearsal, I finally got to hear the solos, and one immediately caught my attention.  I loved it so much I had to hunt it down.  I will forever be thankful for that since it led me to Selah’s Christmas CD, Rose Of Bethlehem, and introduced me to their music period.

At the time this was released, the trio Selah was made up of siblings Nicol and Todd Smith and their friend Allan Hall.  Todd and Nicol did most of the singing while Allan played the piano.

Selah is known for their covers of hymns and praise songs in ways that are familiar while still breathing new life into them.  And that’s certainly evident here.  The disc starts off with a couple such tracks.  “Silent Night” is up first.  It’s slow and reverent like you’d expect, and Allan’s piano playing is breathtaking.  However, after the first verse, they switch to Kituba, a language that Nicol and Todd learned while growing up as missionary kids in , before switching back to English for the final verse.  It makes a nice version of the song that stands out from the ones we already know.

Up next is “O Come, O Come Emmanuel.”  This song is appropriately dramatic and the minor key really shines through.  Todd’s lead vocals here are amazing.  He and Nicol both have deep voices, and their harmonies as the song goes on are amazing.  The strings help give this song a new feel.

Later on in the disc, there’s an appropriately reverent version of “O Holy Night.”  This is probably the traditional song that stands out the least from the other versions you already have in your collection.

Then there’s “What Child is This?”  Nicol takes the lead here, and you really see just how deep her voice is for a woman.  While the first verse starts out slowly, things pick up after that and the song takes on an almost soft rock feel.  It’s a different take on the songs, especially coming from them, but it works and I love it.

Now if you know me, you know that I live for new songs on Christmas CD’s.  After all, I’ve got so many versions of the classics, I need something new to get me to keep listening.  Considering how many covers Selah does, I am surprised by just how many new songs they have included here.  Some are covers of rare songs I’m not familiar with, but three of them are originals.

Among the rarer covers is “Once Upon a Christmas.”  Since I’m not a Dolly Parton fan, I had never heard this take on the Christmas story before, so I can’t compare it to anything.  This version is slow and thoughtful, and Dolly herself joins them to sing the last verse.  This is the one song that needed some time to grow on me, but I do enjoy it now.

There’s also the title track itself.  “Rose of Bethlehem” is a nice song of praise to the newborn king to close out the disc.  Nicol’s got the lead and she does a great job on the song.

There's also "Light of the Stable," a mid-tempo song of praise for the newborn king.

But it’s the brand new songs I really enjoy.  “Noel” is actually written in Kituba, so the only word I understand is Noel, but the almost chanting they do here combined with the heavy percussion is fun.  I may not understand the lyrics, but I find myself nodding and smiling.

“Joy” pretty much describes the song.  It celebrates the birth of our Savior with an upbeat celebration of all Jesus coming means to us that is very easy to get stuck in your head.

Which leaves us with “Mystery.”  And in case you were wondering, this is the song I bought the disc to get.  It’s a very slow, dramatic song with strong piano and strings.  Todd has the lead as he marvels at what Jesus did for us.  Just check out these lyrics:

Between the lyrics and the music on this one, I still get goose bumps.  The choir that comes in as the song progresses just makes it all the more powerful.

My only real complaint about this disc is that none of the lyrics are included in the booklet.  But I’ll deal with that since the songs are so good.

So if you are looking for a disc to point to you Jesus and His coming to Earth during the busy Christmas season, this is the one to do it.  If, like me, you haven’t picked up Selah’s Rose Of Bethlehem yet, be sure to fix that this year.