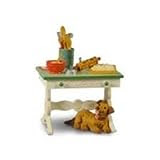 Over the last few years, the Hallmark Keepsake ornament artists have been collaborating on special event pieces featuring furniture from the Claus's house.  For the 2012 in store signings, the piece was an oven.  But four of the retired artists came back to work together and create Mrs Claus's Kitchen Table, which is a great companion piece.

Like the stove, this piece is mostly white with a light green table top and drawer knobs.  There is a fun pattern on the side of the table.  On the top we've got a pot holder, mixing spoons and all kinds of other utensils in a container, mixing bowl with dough in it, an individual cookie cutter, and a rolling pin with designs on it.  That rolling in has obviously been used since the dough laid out on the cookie sheet has that same pattern on it.  And I can't leave out the cute dog sitting under the table hoping for a handout or dropped scrap.

I'm not sure I'd enjoy this ornament much on its own, but as a companion piece, it is fun.  It's nice to see where the delicious goodies are made.  Since not as many artists worked on this one, it is plainer than the stove, but the price also reflects that.  It's half the price.

Being a table, it should come as no surprise that this ornament sits flat.  After all, you've got four legs and a dog down on the ground.

The rolling pin has the loop for hanging the ornament in it.  The table tilts every so slightly to the right hand side, but it's not enough to make a big different.  Despite the slightly bigger size, this ornament isn't that much heavier than a typical Hallmark ornament, but it would still be a good idea to place it on a stable branch if you are going to hang it.

As I said, this ornament doesn't really work well on its own, but combined with the other 2012 event piece, it's fun.  And if you are enjoying these artist collaborations, you'll definitely want to pick up Mrs Claus's Kitchen Table.