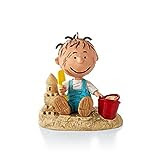 
Pigpen’s Having Fun at the Beach

For 2013 and 2014, Hallmark is trying something new – an ornament series that starts and ends in twelve months.  No, it isn’t the 12 Day of Christmas series (and believe me, there are people who are upset about that).  They are releasing a different Peanuts character for each month of the year.  And first up is Fun At The Beach starring Pigpen.

This is the August ornament in the series and features Pigpen on the sand.  To his right (our left) is a sand castle – you know, one of those detailed ones that you can never build in real life because it takes more artistic skill then you really have.  (Or is that just me.)  There is a tower and windows and it looks really nice, especially for the size (it’s about half as big as Pigpen.)  In his right hand is a yellow shovel and off his left hand is a red bucket.  The bucket is filled full of sand, and in a nice detail, it is sitting in the sand at an angle and about to spill its contents.  You could say there is dirt in the sand around him, but really, this is Pigpen.  How can you tell?

Pigpen is smiling, and it’s hard not to smile as you think about a nice trip to the beach.  Heck, I’m ready to head to the beach right now just writing this review.  You don’t mind if I stop here and head out, do you?

This ornament is obviously much more than Pigpen himself with the castle and bucket and sand holding them all together.  As a result, the ornament has a nice wide base and sits flat, which is a very good thing.  (I’ll explain why in a moment.)

Since this is a series, there is a 1 in the series marker on the bottom.  I was curious if they would use a different marker since this is a year long series and not a Christmas series, but it is indeed a triangle designed to represent a Christmas tree.

Pigpen has a brass hook in his head, so you can hang him if you so desire.  He tips slightly to the right, but it’s not a bad tip at all.

But how would you display a year long series like this?  You could certainly put the ornaments on your Christmas tree.  However, Hallmark came up with an ingenious solution, or so I thought.  They also released a red stand that looks sort of like Snoopy’s doghouse on the top (sold separately, of course).  It has Happiness is… in white across the top.  There is a hook hanging down and six different double sided backdrops – one for each ornament.  The backdrop for Pigpen is sand, a beach umbrella, and a beach ball with a little hint of water behind him.  I thought this was perfect and couldn’t wait to get it.  Unfortunately, the angle of the hook on the stand and the hook on the ornament means that Pigpen is twisted sideways if you hang him from this stand.  Because of the wide base on the ornament, it’s no problem to set him on the front of the display, and he still looks nice with the background.  But I’m still disappointed that I can’t hang him.

I’ve gotten over the disappointing display and I’m looking forward to completing the series.  Now, please, can I go have my own Fun At The Beach?