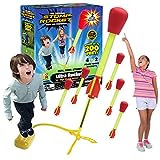 Pros: Fun toy that will burn lots of energy
Cons: Rockets could be flimsy if abused
The Bottom Line:
Blast those rockets with
A simple stomp of the foot
Hours of great fun


How High and How Far Can You Stomp This Rocket?

I’m just a big kid, so whenever I visit my family, I enjoy seeing what toys and books my niece loves to play with.  Yes, we had several tea parties while I was last there.  But a trip to the park introduced me to the absolute fun that is the Ultra Stomp Rocket.  My brother and I had just as much fun with it as my niece did.

The idea is so simple it’s hard to believe this hasn’t been around for a long time.  Several metal bars create a stand.  Attached to this stand is a hollow tube that is attached to a giant soft plastic box.  I really don’t know how else to describe it since the outside is plastic and it compressed as you stomp on it.

And right there is something that will help kids understand physics.  No, we didn’t try to understand anything but having fun playing with it, but you can easily see how the angle of the launching tube greatly affects where the rocket goes.  Whether you discuss it or not, I'm sure this will click with kids when they study that in school.

It definitely goes.  My brother and I were able to launch it pretty fair and pretty high.

The rockets themselves are a light plastic with a rubbery nerf like material on the end.  (No, this is not an official nerf product.)  They land softly, although I wouldn’t want to have one shot directly at me.  With the force they launch, I’m sure that would hurt.

The box recommends this for ages 8 and up with supervision.  I’m sure one of the reasons is to make sure kids don’t get hurt shooting these at each other.  Another reason is that the launching stand takes a bit of work to get together.  It’s just a matter of screwing a few pieces together, and my brother did it in a few minutes.  I’m sure an 8-year-old could handle it on their own.

But here’s the thing – my niece is 3 - obviously, much younger than the suggested age.  To make the rockets fly, she had to jump on the plastic box instead of step on it, and she doesn’t have the weight to make it go as far as my brother and I do.  And yet she was having a blast with it.  She'd launch one and then run and get it and bring it back, grinning the entire time.  Would I recommend leaving her alone with this?  No.  But with adults watching closely, I think this could be enjoyed by younger kids.  Adult supervision is the key.

The Stomp Rocket comes with the assembly to launch the rockets and four rockets.  They seem bit flimsy, but so far none have broken.  This might not be the most durable toy, but it is fun.

Obviously, you’ll need a large tree free area to launch the rockets into.  Since we played with it at the park, that wasn’t an issue at all.


So I recommend the Ultra Stomp Rocket as a fun toy that will entertain kids of all ages.  It’s so simple and yet loads of fun.
Posted by Mark Baker at 6:54 PM