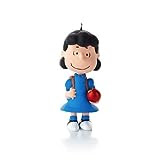 
Lucy’s Heading Back to School

September brings memories of crisp air and starting a new school year.  Okay, so all of that is long gone (we don’t cool down until November in and I’ve been out of school for years), but that is still what I think of when I think September.  And that’s what Hallmark has captured with the second in their Happiness Is Peanuts All Year Long series – All Set For School.

This ornament in the series stars Lucy.  It’s a rather simple ornament.  Lucy has an apple in her left hand and her right hand is holding the strap of her backpack.  She’s wearing her trademark blue dress.  And that’s pretty much it.

And it’s the simplicity that gets to me.  While some of the others in the series are simple, this one seems especially so.  It’s just too simple.  I’m not sure why this one stands out to me, but it does.  It’s quite possible that part of the problem is that Lucy’s backpack is hidden behind her.  Unless you really look at it, she looks like she is just standing there holding an apple.

Then again, it might be because of all the ornaments in this series, this is the only one where the character seems a bit off.  It looks like Lucy, yet it not quite right.

Plus she’s smiling.  What kid smiles on the first day of school?

As with the others in the series, this one has a background to fit in the Happiness Is red stand that Hallmark is also selling to compliment this series.  In this case, it’s a street scene with a sidewalk and grass showing.  On the right hand side is a Bus Stop sign.  And that’s pretty much it.  It’s simple, but it really captures the feel of the Peanuts comic strip, and I like it.

Lucy is standing on her feet, and she’s mostly steady.  You could certainly display her that way if you wanted to.  Because her feet as so small, the 2 in a Christmas tree series marker is elsewhere on the ornament.  I’ll let you have fun finding it, but it’s not too hard.

However, this is an ornament to hang.  Unlike most of the series, the brass ring on Lucy’s head is turns such that she hangs straight from the hook on the Happiness Is stand.  That’s a welcome sight and how I plan to display the ornament each year.  Whether you hang it that way or on your tree, you'll be happy to see that she does hang straight.

All Set For School is my least favorite in the series (while I don’t have them all, they are all on display at Hallmark stores).  But it’s still a good ornament.  Coupled with the colorful background that comes with the stand, and you’ll find you do still enjoy it.