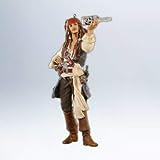 
Captain Jack Sparrow Gets a Message in a Bottle

While I enjoy the Pirates of the movies, I don’t tend to get the Hallmark ornaments based on the franchise.  I’ve got to draw the line somewhere, right?  I made an exception for this year’s ornament, On Stranger Tides, however.  It’s just too much fun.

As usual, the ornament features Captain Jack Sparrow, and he’s dressed in his usual costume.  This year, he’s holding a bottle with a ship inside.  Okay, so actually the ship just something painted on a clear strip inside the bottle, but when you look at it quickly, it does look more 3D than that.

I enjoy the illusion, which is fairly decently done, and I like the idea of Jack looking at a ship in a bottle.

Since I’ve only seen the fourth movie once (shame on me, I know), I had forgotten this was actually inspired by a scene from the movie.  I believe it was somewhere near the beginning.  The ship is actually Captain Jack’s ship, The Black Pearl.  It’s being held hostage to get Jack to go along on the mission to find the Fountain of Youth.  Even though I’d forgotten that detail, when I realized it, it makes the ornament more special since it is recreating a scene.  The other Pirate ornaments Hallmark has released don’t always do that.

Jack is standing with his feet at a bit on an angle plus he's arching his back.  I wasn't sure if this ornament would stand on its own, but it does.  It even feels fairly stable when you do that, too.

Being a Christmas ornament, you can also hang it from the top of Jack's head.  While it does technically tip forward slightly from the standing position, from the way Jack is standing you'd never know.  Only if you look at his feet can you tell he's not hanging completely straight.  And he doesn't appear to be tipping from side to side at all.

The die hard fans of the franchise already snapped up their copies of this ornament, but for the more casual fans, On Stranger Tides is one is worth giving a second look.  I’m certainly glad I did.