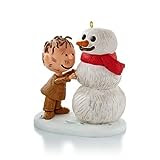 Pros: Cute ornament with a little used Peanuts character.
Cons: Slight tip, but a minor issue
The Bottom Line:
A dusty snowman
Must be the work of Pigpen
Peanuts fans will love


Raising a Cloud of Dust in a Snowstorm

When it comes to franchised pop culture ornaments, Hallmark has a few characters they always go to.  With a few exceptions, Peanuts fans get the same offerings in terms of characters every year.  One of those exceptions came this year with Pigpen Builds A Snowman.

The ornament is pretty much what you'd expect from the title.  It features Pigpen, the character in Peanuts who was always messy, just completely a snowman.  The snowman is three balls of snow with a red scarf, black eyes and mouth, and a carrot sticking out for a nose.  Pigpen himself is wearing all brown and has some smudges of dirt on his face.

And the dirt doesn't just apply to Pigpen.  The snowman seems to have gotten dirty, too, somehow.  He's got a bit of a tan coloring to him with lines all over the place.  You'd think Pigpen built him or something.  There are even dirt smudges on the ground around Pigpen and the snowman.

The one thing the ornament doesn't have is the cloud of dust that is often around Pigpen.  It could have been there, but I think it would have detracted from the ornament instead of making it better.  I prefer it the way it is.

The biggest thing that surprised me is how big the ornament is.  It's just shy of 3 inches high, but for some reason, I was expecting something about three quarters this size.  I'm not complaining because he looks nice this way.  And as a friend pointed out, he is in scale with earlier Peanuts ornaments.

The base of the ornament is nice and flat, which means you could display him year round if you wanted.

But if you want to hang him on your Christmas tree, you'll find the brass hook in the top of the snowman.  Despite the hook being slightly off center, the ornament does tip slightly toward Pigpen.  It's only noticeable when you first pick the ornament up from a table, so by the time you get it in the tree, you'll never know.

Peanuts fan that I am, it's nice to have another character to add to my tree.  The fact that Pigpen Builds A Snowman is so much fun is a wonderful bonus.  And fan of the strip will be happy to add him to their tree.