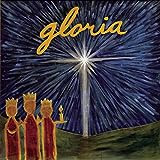 Pros: Some good new songs and fun classics
Cons: I wish the Rocketown artists had done more
The Bottom Line:
Too many others
Overshadow Rocketown
Wanted to like more

At the turn of the century, I had a clear favorite record label - Rocketown Records.  They had three of my favorite artists and some others I enjoyed even if I didn't love them.  So when I heard they were all collaborating on Gloria: A Christmas Celebration, I was really looking forward to it.

Then I heard it.  Don't get me wrong, it's good.  But it didn't live up to my expectations.

The label was started by Michael W. Smith, and he invites some of his friends to help out with things.  Frankly, that's part of the problem.  Charlie Peacock was heavily involved in writing some of the original songs and arranging other tracks.  I'm not the biggest fan of Charlie's work, so naturally I don't quite connect with the songs here.

The disc starts out with one of his tracks, "Sing Gloria," which he sings as a duet with Ginny Owens.  It's got some light bell effects and it celebrates the traditions of the season while reminding us to praise God for the gift of His son.  I actually kind of like the song, until we get to the repeated line, "It's a wonderful kind of feeling/Like you're living in a house that has no ceiling."  Really?  This disc came out in 2004, and I'm still trying to figure that line out.  Especially in winter, I like my ceiling and the heat it traps in.

Amy Grant joins the disc next with "God is with Us."  It's a much better song than most of her third Christmas CD.  The melody really flows and the lyrics celebrate God coming to Earth in the form of Jesus.

One of the big surprises to me was that Chris Rice wasn't on the disc.  He'd left the label by this point, a sign I should have seen coming that the label was sadly on the decline.  But his modern Christmas classic is still here.  Wayne Kirkpatrick, best known for some of the hits he's co-written with Michael W. Smith, does a great job with "Welcome to Our World."  It doesn't stray too far from the original and is a nice mid-tempo song that really humanizes Jesus becoming, well, human.

At this point, we finally get a traditional Christmas song.  Christy Nockels, the female half of Watermark, does "O come, O Come Emmanuel."  It's just a slight Jewish feel to it, and I really enjoy this take on the classic.

Michael W. Smith joins Out of the Grey's Christine Dente for "Prepare a Place," a song they also co-wrote.  It's a slow piece about preparing ourselves to meet Jesus.  Michael plays piano, but it's very heavy on the strings.

Two Rocketown artists team up for "O Come, All Ye Faithful."  There isn't much to really say about it.  Shaun Groves and George Rowe do a good job with it, but it tends to blend in with other versions of the song.

Probably the most interesting match up is "Love Came Just in Time."  It pairs rocker Taylor Sorensen and the heavy country group Alathea.  The song is pretty much what you'd expect from a combo of the two, but somehow it works.  I also like the fact that it looks as Simeon and Anna, two players in the Christmas story you don't hear much about because they show up after Jesus is born.  The theme of the song is waiting on God to fulfill His promises, something both of their stories demonstrate.  Plus sings the verse about Simeon while the ladies of Alathea tackle Anna.  It's just fun.

Cindy Morgan was another of the friends invited to participate in this project.  "Follow That Star" is her contribution.  I've always found Cindy's music a bit out there.  It's pretty but hard to figure out exactly what she is saying.  That's the case again here, which I think is from the point of view of one of the wise men, but kind of hard to tell for sure.  The song is slow and introspective with very pretty strings, so I enjoy listening to it.

The themes of the first song come back again for "Christmas Kind of Feeling."  Christine Dente is back on this one as it celebrates cookies, decorations, and Jesus coming to Earth.  It's upbeat and fun.

For the final track, Ginny Owens returns with a slightly country version of "Go Tell It on the Mountain."  It's a fun way to close things out.

So that covers the 2004 initial release.  In 2005, the added four live tracks to the end of the disc.  Naturally, I wound up getting both.  These tracks are from the tour to support this disc the previous year.  They are mostly traditional songs, with Taylor Sorensen rocking out "Blue Christmas," Watermark singing "Have Yourself a Merry Little Christmas," and Ginny Owens playing piano and singing "The Christmas Song."  The final track is Christy Nockels singing "God is with Us."  She does as good a job as Amy does earlier in the disc.

This is one of those discs where it's easy to see the flaws.  Personally, I wish they had kept the disc to maybe Michael W. Smith and the artists on the label.  If they'd been allowed to shine, I think I would love it.  And that's what I was expecting, so when I didn't get it, I was disappointed.

But what is here is good.  I always pull this disc out and listen to it each year.  It's not the first one I pull out, but I do still enjoy it.  It's not a traditional Christmas recording at all, but that can be nice in the middle of December when you want something different.

So if you are a fan of the artists here, track Gloria: A Christmas Celebration down.  It's a nice one to pull out in the middle of the month and enjoy.