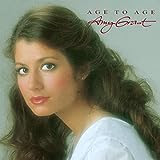 Pros: Some truly timeless songs with amazing lyrics
Cons: Some dated production and weak lyrics (not that I care about either)
The Bottom Line:
While dated today
There is some truly timeless
Music on this disc

When Age to Age came out in 1982, it was Amy Grant's fourth studio release and sixth overall release.  And thanks to the strength of a few of the songs, it caught on like nothing else she had released, launching her music career into the heights she is still enjoying today.

I came to this release almost 10 years later.  I didn't get into Amy Grant's music until I was in high school, so I probably got this tape around 1990.  Yes, that's right.  I first had this on tape.  Listening to it now makes me think of high school, and some of those songs still speak to where I was then while others still hit me where I am every day.

Amy Grant has always written many of her own songs, so it's ironic that the biggest songs from this disc weren't written by her.  It's hard to say at this point which single is bigger, but I'm going to have to go with "El-Shaddai."  This quiet praise song was penned by another big name in Christian music, Michael Card.  It's a beautiful ballad that praises God for his might to work in our lives, using Bible stories to remind us of what He has done in the past.  Piano and strings work together to give this song a timeless arrangement.

The other big song helped launch the career of a then unknown Rich Mullins.  While it would be another few years before he would put out his solo release, he first made a name for himself as the author of "Sing Your Praise to the Lord."  It's got a big, dramatic instrumental opening that uses a piano and strings to create a dramatic feel before we switch over to the pop sound that Amy is known for.  It's an upbeat track and the main song uses some keyboard, dating is slightly.  But the reminder to praise God is timeless.

Speaking of career launchers, Michael W. Smith, who was still a year away from his own debut release, is credited with co-writing some of the songs and playing the keyboard on this release.  Just a point of trivia for your next party.

The rest of the songs on this disc aren't as well known today, but there are still some great songs here.  It opens with "In a Little While," a reminder that our life on earth is temporary and we have the hope of Heaven to get us through the hard days.  Yes, the music puts is squarely in that time when the 70's were transitioning to the 80's, but I've listened to it so long that any other arrangement would sound weird.  I still like it.

Two of the songs take me straight back to high school, when I often struggled to make friends.  Not surprisingly, one of those songs is "I Love a Lonely Day."  This slower keyboard based song is about remember who we truly have in our lives when we feel lonely, starting with God.  "Raining on the Inside," an even slower song speaks even more directly about the comfort God can give in times of hurt.

In the upbeat category we've got another Michael Card offering, "I Have Decided."  I dare you not to tap your toes to this guitar driven statement of faith.  Then there's "Don't Run Away," a challenge to those who are trying to run from the call of God on their lives.  The lyrics come fast on this one.  While some of the lyrics here are timeless, these are fairly trite.  Just take a look at the chorus: "Don't run away/You're headed nowhere/Keep up the pace/You're gonna go there."  What can I say, I still grin when I hear them.  I didn't have the best lyrical taste in high school, and I loved that then.

Then there's "Fat Baby."  A piano based jazzy number, it ribs on Christians who are just interested in going to Heaven and can't be bothered to learn anything about what they say they believe.  But boy do they look the part.  Again, I know it's not a strong song; my parents always found it annoying.  But I can't look at it objectively.  It's a fun number that makes me smile.

I've saved the last two songs for last because they are my favorite and still hit me where I am no matter how many times I listen to them.  Up first is "Got to Let it Go," which is a duet with Amy's first husband, Gary Chapman.  It has very 80's production with upbeat keyboard leading the instruments.  But the call to surrender what we love still gets me every time I hear it.  "All my dreams are far too much for me to hold/Still I hate to drop them/Wheren't they from You?/What did I do?"  "How long must I learn?/This lesson's getting old/I've got to catch a clearer vision/I'm in your hand/You're in command."

Amy closes things out on a slow piano ballad.  "Arms of Love" made another appearance on her latest release, but I am still drawn to the version I've listened to for 20 years.  If the last was a song of surrender, this is a plea for help.  I've been here many times before as well.  "Lord, I'm really glad You're here/I hope you feel the same/When You see all my fear/And how I fail."  "I have found a place here I can hide/It's safe inside/Your arms of love."  It always feels like a short song even though it is three minutes and 20 seconds.  That's partially because of the two verse, chorus, verse, chorus construct.  But those lyrics always lead me in crying out to God.

Objectively, there are several weak tracks here.  I know that.  But I can't be objective, and I would bet that most people who have listened to this disc enough that every note in ingrained in their brain can't either.  No, Age to Age is not the high point of Amy's career, but it is certainly the start of a string of hits.