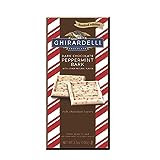 
Wait, Was That Peppermint I Tasted After All?

Last year, I was introduced to the pleasure that is peppermint bark.  Considering how much I love peppermint, it wasn't hard to sell me on it at all.  So this year, when I spotted some Ghirardelli Peppermint Bark with Dark Chocolate in the store, I figured it would be delicious.  Unfortunately, I was wrong.

I should confess that it was a gamble for me because I'm not usually a fan of dark chocolate.  I prefer the sweetness of milk chocolate.  But I figured it would be a risk worth taking.  The peppermint would more than make up for the bitter dark chocolate, right?

Wrong.  Eventually, there's some peppermint taste to the dark chocolate, but it appears to be an after thought.  Instead, all you can taste is the bitter dark chocolate.  If you aren't a big peppermint fan but want a hint of the flavor, you might like this.  But for those of us who do enjoy the taste of peppermint, this is just a tease instead of the real thing.

Frankly, how the candy looked should have given me a clue.  It's got a layer of dark chocolate on the bottom and a white layer on top that is just as think.  This white layer has red and even a few green splotches in it, but no pieces of real peppermint like the rest of the peppermint bark I've seen has.  They seemed to rely more on flavoring instead of actual peppermint pieces, and that's reflected in how little peppermint taste there is.

It's candy, so it should come as a surprise that it's not really healthy.  Half of the three oz bar I bought contains 220 calories, half of them from fat.  What do you expect when the first ingredient is sugar, followed by unsweetened chocolate and cocoa butter.

This bar has lasted a month in my pantry while other peppermint items I've bought have disappeared two or three times over.  Obviously, I won't be buying Ghirardelli Peppermint Bark with Dark Chocolate again.
Posted by Mark Baker at 12:57 PM

Email ThisBlogThis!Share to TwitterShare to FacebookShare to Pinterest
Labels: food