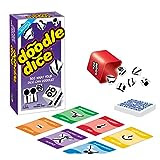 Pros: Creative game and good gameplay
Cons: Can be frustrating to get the most difficult cards
The Bottom Line:
A roll of the dice
Can create a fun doodle
Try to collect six

Many games seem to be variations on a theme.  So when you run across a creative game that stands out from the crowd, it’s time to investigate.  And when that game turns out to be fun, it’s even better.  That’s been the case for Doodle Dice for my family.

Okay, I should be honest.  My brother and sister-in-law found it and gave it to our parents.  But we all love it.

The game is for 2 to 6 players age 6 and up, although really as soon as a child is able to handle taking and waiting their turn and a little frustration they can play.

The game comes with a deck of cards, a plastic cup for shaking the dice, and six – six sided dice.  Each dice has six different shapes on it – dot, dash, slash, arc, squiggle, and face.

The object of the game is to be the first player to collect six cards, one of each color, by rolling the dice and getting the combinations of shapes to create the “doodle” on the card.  The colors represent different number of dice required.  For example, the easiest, orange, just requires one die, like a dash.  The most difficult, purple, requires all six dice to win.  Examples here are a good dog (4 dashes, one dot, and a slash), Swimming Sue (face, two slashes, two squiggles, and a dash) or Singin’ in the Rain (two arcs, a dash, two slashes and a face).  Don’t worry, each card not only shows you what dice combinations you need but how they assemble to create the named item on the card.  Surprisingly given the six simple shapes, most of them look fairly accurate, especially for a doodle.

You start the game with six cards from the deck face up, one of each color.  As each player goes, they start by taking a new card and turning it face up.  Then they have three rolls to create any doodle turned face up.  You don’t have to announce what you are going for, so you can change at any point.  And if you are going for a six dice card but wind up with a three dice card at the end of your turn, you can take that card instead.

Just to add a little more interest, there are a few extra roll and lose a turn cards in the deck.  You can also steal someone else’s card, but for those you have to declare your intent before your first roll.

All five of us have played this game several times over the last few years, and we enjoy it.  The game seems to go to the first person who can get a six and five dice card because the rest are fairly easy to get.  I rare win, but I enjoy the challenge.  It’s fun to roll and see what picture you can create.

As you can imagine, there are many more six and five dice cards than there are two dice cards.  Not only are the lower cards easier to get, but there just aren’t that many combinations.  Never have we looked at a picture and not been able to figure out what the picture is supposed to be.


This game requires more luck than true strategy, but it’s fun none the less.  I have a feeling that we’ll keep doodling with Doodle Dice for a long time to come.
Posted by Mark Baker at 6:30 PM