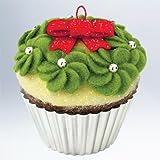 Gourmet, designer cupcakes seem to be popular right now, and Hallmark started tapping into that last year with the Christmas Cupcakes series.  Simply Irresistible! is the second offering in this delicious series, and it's another winner.

The cupcakes in this series (so far) have been made from felt, although the silver wrapper feels like it is made from plastic.  You can see a hit of the chocolate cupcake peaking out of the wrapper with a nice, thick layer of vanilla frosting on top of that.

The decorations on the top form a wreath of sorts.  The outside edges have light green blob on them that look like they were made by squeezing just a little green frosting out of a decorating tube.  The center of each of these areas has a silver bead in it.  In the middle of this wreath of frosting is a red bow.  And there is just a hint of glitter over everything to catch the light.

I must admit I don't like this ornament quite as much as last year's debut.  And the reason is the color of the green frosting.  The green has a hint of yellow to it; it's not a traditional Christmas green.  Since I'm not a fan of yellow-green, I'm not as big as fan of this ornament.

The base of the ornament sits nice and flat, so if you want to include it in a display of some kind, it would be a perfect fit.  The bottom is also where you'll find the 2 in a Christmas tree to denote it's place in the series.

I'm hanging mine on my tree this year, and there's a small red piece of thread to help with this.  Because this loop is in the back half of the ornament, it tips forward some.  It's just enough that I think it is a design feature, and it allows you to see the top of the ornament no matter where on the tree you hang the cupcake.  Personally, I think that's a great feature.

I like the wreath on the cupcake idea, and the red bow is certainly festive.  I just wish they had chosen a different color green.  Even so, Simply Irresistible! is a delicious looking addition to the series.

Be sure to check out the rest of the Christmas Cupcakes series.