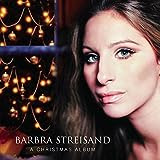 I have commented several times over the years that my Christmas music collection is very eclectic.  That’s because I have stuff I grew up listening to, so I only have the one disc by that artist.  Such is the case with Barbra Streisand, but I just love her 1967 release A Christmas Album.

For the most part, this disc is filled with just her voice and an orchestra.  There are times where backup singers are involved, but Barbra singing solo is much more prominent.

The disc opens with a different take on “Jingle Bells.”  In fact, she calls this version “Jingle Bells?”  It’s fast and furious with a couple of different voices as well as some strange rhythms.  (“Ja-ja-ja-jingle bells” any one?)  I actually find it quite funny, but my dad hates it.  Either way, it’s just under two minutes, so it’s over very quickly.

The rest of the first half is definitely my favorite part of the disc.  The horns start of “Have Yourself a Merry Little Christmas,” which includes a lyrical introduction I don’t think I’ve heard anywhere else before she launches into the familiar song.  “The Christmas Song” starts off with some background singers before Barbra launches into a slow take on the song.

I have to give a special shout out to “White Christmas.”  Again, there’s a special introduction where she bemoans the nice weather in on Christmas Eve.  Now that I live in , I especially appreciate the song.  Then again, I’ve never had a white Christmas and don’t exactly dream of one since I’m not a fan of snow.  (I always dream of a wet Christmas because we always had rain during December, but that’s another post.)  The chorus of backup singers again come in at the end of this track.

This disc was also the first time I heard “My Favorite Things” as a Christmas song.  I’m still not sure I get the connection, but it’s here.  Barbra really slows it down, and the strings behind her are absolutely beautiful.

“The Best Gift” is a song I’ve never heard recorded anywhere else.  In it, Barbra sings about the one thing that makes Christmas much more special, a baby.

This is where the old record I grew up listening to switched sides.  For some reason, I’ve never quite connected to the second side as much as the first.  Not to say the tracks are bad.  We’ve got “Silent Night” and a version of “Ave Maria” that is sung in German and yet manages to not be overly operatic.  This also features the most prominent use of the backup chorus.

The disc rounds out with “O Little Town of Bethlehem,” “I Wonder as I Wander,” and “The Lord’s Prayer.”  Again, I wonder at the last one as a Christmas song, but it’s not that big a deal to me.

Maybe the reason I don’t connect as much with the second half is that it sounds so much like the first.  Apart from the opening “Jingle Bells?” the disc is made up of 10 slow tracks.  Don’t get me wrong, the orchestration is beautiful, and Barbra’s voice is wonderful.  But a little more variety would have really helped it out.

Then again, when I stick these songs on, I immediately smile.  In my mind, I’m back in my parents’ house curled up with a good book by the Christmas tree counting down the hours until Christmas morning.  And for that reason alone Barbra Streisand’s A Christmas Album will always have a place in my Christmas rotation.