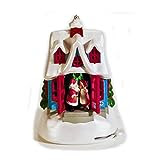 Pros: Glowing Christmas tree and fun action; cute overall
Cons: None for the young at heart
The Bottom Line:
Under mistletoe
In front of lit Christmas tree
Santa, Mrs. kiss


Sneak a Kiss under the Mistletoe at Santa's Kissmas Cottage

Hallmark's series ornaments are a serious addiction.  They slap series on something, and I give a second or third look at ornaments I would have passed over without a thought.  Last year, I resisted starting Kringleville, but when I found it on sale this year, I broke down and bought Kissmas Cottage.

This series features Santa in various buildings around the merry town ofKringle.  Each ornament also features a lever you can slide to give the ornament a bit of motion.

This ornament finds Santa and Mrs. Claus at home.  It's a red building with nice white snow on the roof and a healthy pile of snow around the base.  The windows are small, so the only thing you really notice when the doors are closed in the glowing Christmas tree in the house.  See, there's an option light clip in the back.  While you don't actually stick the light in the ornament, when you position it correctly, the tree lights up.  That's a detail I didn't really notice until I got the ornament home - it's that subtle.  But it's a detail I love.

So, what about the lever?  When it's all the way to the left, the doors on the cottage are closed.  But as you slide it to the right, you see Santa and Mrs. Claus come together under the mistletoe for a kiss.  It's a very cute idea and a very clever use of the lever.

In addition to 2010 being written on a corner of the building, you'll find it in the copyright information on the bottm of the ornament since that's the year the ornament originally came out.  You'll also find a 1 in a Christmas tree marking this as the first in a series.

The base of the ornament is large enough that it will sit on any flat surface with no problems at all.  There is a hook at the top for hanging the ornament, and it hangs straight.  Of course, if you hook a light to the back of the ornament, that will have some effect on how it hangs.

I didn't need to start yet another series of Hallmark ornaments, but I'm glad I did.  Kissmas Cottage is cute, and the glowing Christmas tree makes it outstanding.

Be sure to check out the rest of the Kringleville series.