Ornament Review: This Little Light of Mine - 2011 Hallmark Ornament 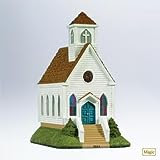 
This Little Candlelight?  A 2011 Hallmark Ornament that Fits with an Old Series

The first time I saw the 2011 Hallmark ornament This Little Light Of Mine, I thought it fit in perfectly with their discontinued Candlelight Services series.  That series featured a different style of church with stain glass type windows that would glow if you stuck a Christmas three light behind them.  And that's just what this ornament does as well.

The ornament itself is of a small, white clapboard church.  It's a bit narrow with a steeple up on top of the front of the church.  Unlike almost all the churches in the Candlelight Services series, this one has green grass around the church at the base instead of white plastic meant to represent snow.  There is a small 2011 on the bottom step.

There are windows on all four sides and an opening in the back for the Christmas light.  The windows are mostly blue and red, and they glow so nicely when you stick the light in them.  They're plastic, but every so often when I catch the light on this one just right, it looks like they've got real glass in there.  It is absolutely beautiful and better than some of the ornaments from that series.

But this ornament does have an added twist - a song.  If you put the batteries in the bottom of the ornament and press the button on the right side, you can hear a Gospel choir singing "This Little Light of Mine."  The song choice seems a little strange to me; I would have expected a Christmas song.  But it is a fun recording and I do like it.  The button that starts the song is pretty well disguised, so if you won't like the song, just don't put the batteries in and no one will know the difference.

I like to display my churches on my entertainment center, and I've squeezed this one into the space.  The nice flat base makes it a breeze to display this way.

However, if you did want to hang the ornament, there is a loop in the top of the roof.  The church does tip forward ever so slightly, but it's not enough to be an issue, especially by the time you have a light in the back and are fighting branches.

While Hallmark has made no mention of this tying into the Candlelight Services series, the similarities are too obvious.  But whether you had that series of ornaments or not, if you like stained glass, This Little Light Of Mine is a great addition to your ornament collection.

While not an official part of the series, check out the ornaments in the Candlelight Services series.