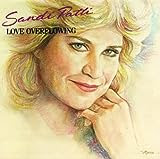 Pros: Great music that will encourage your heart
Cons: Weak lyrics on some songs
The Bottom Line:
Truly classic song
Plus others I've loved for years
Make for a great disc


My Love is Still Overflowing for Sandi's Second Release

When I finally started buying some adult type music as I hit the end of elementary school, one of the first artists I got into was Sandi Patty (or Sandi Patti as she was known then).  I know, I know, I was cutting edge and daring.  Anyway, the first one I bought was Love Overflowing, which was actually several years old at the time.  I loved it, and I still enjoy these songs to this day.

This record was first released in 1981 and was her sophomore release.  Now before you get images of 80's music in your head, let me stop you.  This isn't really that bad.  For the most part, they stick with real instruments like piano and guitar and strings.  A couple of the songs sound dated, but it is mostly timeless arrangements.

However, looking at the credits, especially the song writing credits, you can definitely feel the 30 years.  A couple of the songs were co-written by Gary Chapman, Amy Grant's first husband.  Michael W. Smith even wrote the music to one of the songs, and this was before he released his own project.  Likewise, Steve Green does background vocals here.  David T. Clydesdale, a big arranger during the decade, wrote a track.  And another big time song writer at the time, Dottie Rambo, contributed two.

One of Dottie's songs is a song that Sandi will always be associated with.  "We Shall Behold Him" starts quiet and quickly grows as Sandi sings of the glories of Jesus' return to Earth.  With a full orchestra backing her, this definitely feels timeless, and the huge finish really allows Sandi to show off her range and the power of her voice.  It's an amazing song.  Sandi has tried to cover it several times since, but this remains the best version by far.

The disc starts out on a lighter, upbeat note with "Down in My Heart," the only song that Sandi had a part in writing - she wrote the music.  Yes, that is a keyboard giving us the introduction, but the strings help offset the effect, and I love Sandi's duet with herself here.

"Keeper of the Well" is another fun track that plays off Jesus' statement that He is the living water.  It has just a hint of a Gospel feel to it.

From there she moves into three slower tracks, but the lyrics to both are great.  The title track reflects on how God's overflowing love changes us for the better.  But I tend to go more for "So Far," a reflection on how God has carried the singer through the trials so far, which gives confidence for the new challenges to come.  It definitely starts with keyboard, but not obnoxious 80's keyboard, and the strings on the chorus are beautiful.  Side one of the record closed out with "When the Time Comes," a cry to live for Christ at all times.

Sandi has done quite a few popular duets over the years, and she has her first duet here.  "The Home of the Lord" features Russ Taff and is a pop track.  In fact, this is the one song that definitely feels like an 80's song to me.  The horns aren't enough to disguise the synthesizer used here.

"Somebody Believed" mixes in hints of 50's music in this reminder of how faith in God can work miracles.  Sandi's back up vocals here really are what make this feel like a flashback song, and the heavy use of horns almost gives it a big band feel, which is older than the 50's.  Either way, it's a fun song with a great reminder.

As with side one, things slow way down for the final three songs, which include "We Shall Behold Him."  But up first is "In His Hand."  There's nothing truly new or surprising about the lyrics - "Bring your burdens and all your failures/Lay them down and rest here in His hand."  But I still love it.  It's probably because when I first heard it the idea still seemed new to me.

Finally, the second side ends with "I Will Praise Him."  I'd actually heard this song before I bought the record, and was thrilled to own a copy of it.  Looking at it now, the lyrics aren't anything special, it's a normal song of praise for all God has done for us.  But a part of me still loves it because of that connection all those years ago.  The orchestra gives it a nice full sound.

Now I've been reviewing this as if it were still the record I bought roughly 25 years ago.  The truth is I replace that with a CD copy years ago, and even that is now out of print.  I recommend tracking it down because the songs are still enjoyable.

When I'm being honest, I do have to admit the lyrics aren't always as fresh as I think they are.  But I've been listening to these songs for so long that I will probably always enjoy Love Overflowing.