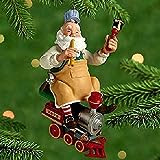 Pros: Santa looks like he is having so much fun on the train
Cons: Bad tilt when you hang the ornament
The Bottom Line:
Santa's toy train trip
Makes for fun series debut
Too bad that he tilts

At some point, I kind of forgot that Santa was supposed to be a toy maker.  But that's the subject of a popular series of ornaments from Hallmark.  Toymaker Santa started in 2000 with this ornament that features a toy train.

Santa is depicted as being pleasantly overweight and a jolly man with a full white beard.  This his rosy checks and slights for eyes, you get the idea that he is smiling.  But he's not decked out in his traditional red.  He's wearing a tan work apron over a green shirt and red pants.  He's even got a train conductor hat on his head.  His left has is holding a bell, and in his right hand he has a whistle that he's holding up to his mouth.

Santa is sitting on a toy train engine, the kind that would be like a toy car you could ride around in.  You get the idea that he is testing it out to make sure it will work for the kid he is giving it to.  It's certainly a little small for him but not so oversized that it looks ridiculous.  The train is mainly red with a few parts green.  2000, the year the ornament game out, is written in gold on it.  There are six wheels on the train.  On mine, four of them turn, two on each side.  But it's not the same two on both sides, so I have a feeling all of them are supposed to turn.

The ornament will stand up on the wheels, although it's not super steady.  Personally, I recommend hanging it from the ring at the top of the ornament.  Unfortunately, he's not very well balanced.  He tips down noticeably in the front and even tips to one side slightly.  Branches on your tree can help with this, but it is a disappointment.

As I mentioned earlier, this is the first in a series Hallmark is still producing.  As a result, you can find the 1 in a Christmas tree on the bottom of the ornament.  The bottom of the train is pretty narrow, but it is down there.

This was a good start to the series.  I like the idea of Santa having fun testing out the toys he and the elves are making.  This isn't quite as fun as some of the later editions, but I do like it.  Unfortunately, the tilt is pretty bad.


So the series didn't get off to the best start.  Still, the 2000 debut of Toymaker Santa is fun enough to leave you imaging the fun that is to come.