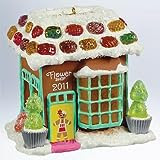 Pros: Inviting glow of the lighted windows and roof
Cons: Decorations too plain; nothing makes it a flower shop
The Bottom Line:
Windows all aglow
But the rest of ornament
Is not inviting

When Hallmark started their Noelville series of ornaments, it was a great idea perfectly executed.  The series features a town, but a town made out of gingerbread.  The details on the first few were fabulous.  But 2011's addition, Flower Shop, is disappointingly plain.

In keeping with the gingerbread house theme, the ornament is a square shape with four brown walls.  Three of them have very large windows on them, including a bay window in the front.  The bay window has frosting lattice work on it, and the others have frosting around the edges; all this frosting is green.  There are some green gumdrop plants on the corners.  The biggest color comes in the roof with is hard candies of various colors.  As with others in the series, there is a gingerbread person, in this case a female with a flower in her hair, in the doorway, but instead of being a separate piece like normal, she's just stuck on the clear plastic that covers the front door.  Above the door, Flower Shop 2011 is written.

One thing that first drew me to this series was the fact that it is designed to stick a Christmas tree light into the back and glow.  All those big windows are covered with a yellow plastic, so it looks inviting.  And the hard candies on the roof glow a pretty color.

The problem is that the others included more in the way of outside decorations.  Even with the lights on, you look at this one and think brown.  Earlier editions in the series featured more color and detail.  Yes, that meant some of the windows were smaller, but overall the look worked much better.

Here's another complaint - what makes this ornament a Flower Shop?  If it weren't for the writing over the door, it could be anything.  In fact, I'd be tempted to call it a house.  Why not play with the pun, call it a Flour Shop, and cover it with white powdered sugar.  It would stand out from the rest in the series but at least it would fit the name.  Plus, since they did a repaint of this ornament, it would make the ornament stand out more.

This series can be hung on your tree or but out on a shelf for display since each ornament has a large base, allowing it to easily sit flat.  On the bottom, you'll find the 6 in a Christmas tree since this is the sixth in a series as well as the year the ornament was released.  The hook for hanging the ornament is centered in the roof, and it hangs straight.

I'm a collector at heart, so it is hard for me to give up on something once I've started.  But if Flower Shop is what the future editions of Noelville are going to look like, I might stop this series.