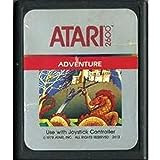 
Quest to Retrieve the Enchanted Chalice While Avoiding the Dragons

When it comes to video games, many popular games involve trying to find or rescue something.  That's something that started way back in the 70's with the first popular home video game system when Adventure was released for the Atari 2600.

As the story goes, an unseen evil magician has stolen an enchanted chalice and hidden it.  Your mission is to find it and return it to the Golden Castle.  There are a total of three castles in the game, and some mazes between them you have to navigate to find what you are looking for.  Stopping you are three dragons and a bat.  While the dragons will eat you, stopping the game, the bat will steal something you are holding and trade it for something he has.

The controls for the game are very easy.  You use the joystick and shove it in the direction you want to move.  To pick up an object, like a key to a castle or a the chalice, just run into it.  Since you can only carry one item at a time, hit the red button when you want to drop an item.

As with most early Atari 2600 games, the graphics are passable and that's about it.  You are just a rectangular block.  The dragons and bat are okay, although the bat is pretty laughable.  The magic sword you can use to kill the dragons looks more like an arrow.  Stuff like that.  But it's still fun.

There are three game variations.  The first is the easiest.  The world is small, with only two castles and dragons and no bat.  The second game introduces the bat and the third castle and dragon.  For those of these games, everything starts in the same place.  I'll use those to remind me of the game play if I haven't stuck this cartridge in for a while.  But the third is the most fun.  In this one, everything starts in a completely random spot, so you never quite know what you'll find where.  Occasionally, I've played this one and explored everywhere only to not find something I need to complete the quest, but most of the time the system seems smart enough to put things places where you can find what you need to finish the game.

The difficulty switches on the back are used, too.  In B, the dragons pause before eating you.  However, in A, they eat you much faster.

This is a one player game.

One thing I like about this game is that if you get eaten or wind up trapped in some other way, you can hit game reset.  That sends you back to the golden castle where you start, and you are alive again.  You can do this as many times as you want.  The downside is that every time you restart, any dragons you have killed come back to life as well.

Even on the third game variation, I can usually finish the game in 5 minutes, 10 minutes if I have a hard time with dragons in some part.  That gives you some idea of how big the game really is and how complicated they make things.  On the plus side, game 3 is different every time you play it.

Another frustration is that blasted bat.  He always appears at the worst possible moment and trades something you've spent a couple minutes trying to find for something you don't need and leaves again.  I know he makes it harder, but I'd love an option for the bigger world without him in it.

Even so, I enjoy pulling this game out every so often and beating it again.  It's simple and easy, but still something about it is remarkably fun.  I can easily get my fix in 20 to 30 minutes, but I really enjoy that time.


I can't deny that Adventure is simple and suffers from Atari 2600 graphics.  But it is fun and worth pulling out every so often to defeat the dragons and rescue the chalice all over again.
Posted by Mark Baker at 4:18 PM