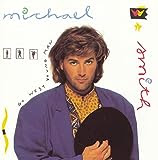 Pros: Fun songs
Cons: Can you say 80's?
The Bottom Line:
80's production
Lyrics that are lots of fun
So I enjoy it

It wasn't until high school that I started listening to Michael W. Smith, and at the time Go West, Young Man was his newest release.  While it may have only produced one true classic, the disc overall is still very fun.

This disc was released in 1990, but it still screams 80's.  The 80's outfit that Michael is wearing on the cover should be enough of a clue.  Michael always embraced the 80's sound, and while this isn't quite as blatant as his last release, it's still pretty heavy on the synthesizer and keyboard.

The big hit from this disc was "Place in this World."  This ballad about searching for your place in life became the anthem of a generation, or at least a year or two in high school.  It was a huge hit in both the Christian and regular pop markets.  And while it does have strings and guitar, you'll really notice the keyboard and synthesizer here.  True confessions time?  I still do love this song.

But there are some other great songs here.  The disc starts off with the title song, a challenge to "Go west young man/When the evil go east" and thereby flee from sin.  After an intro that includes a horse neighing and some slower strings, it quickly becomes a fun up tempo song.

While never a big hit, I've always loved the sacrificial friendship portrayed in "For You."  Another upbeat song, Michael promises to be there no matter how bad things get.

Since Michael plays piano/keyboard, it really comes as no surprise that it is the main instrument in many of these songs.  That's true again in "How Long will be too Long," a call to Christians to stand up for the truth in the face of wealth, other religions, and indifference.  Even today, it's a convicting song.

Combining conviction with pure fun is "Seed to Sow."  While the song reminds us of our need to tell others about God in our own unique ways, the song is very much rhythm based.  Yes, that means more programming and synths, but it works.  Helping this feeling of rhythm is the opening and closing chant, the chorus in the African language of Lugandan.

You really can't accuse Michael of not trying new things.  Yes, that is rap in part of Love Crusade."  While I've never much cared for that genre in the slightest, I still find that song fun, rap and all.  Just shows what the right person can get you to listen to, I guess.

Michael has always had an affinity for orchestra and choral music, and that shows itself in "Agnus Dei."  Yes, Michael does sing in this praise chorus, but it starts with The American Boychoir singing through it first.  The keyboards still overwhelm the strings, so it doesn't feel too much outside the realm of the rest of the disc, but it does still stand out.

There is no way around the dated sound of the disc, and yet I still enjoy listening to it.  Most of the songs make me smile as I sing along at the top of my lungs.  If you still enjoy the 80's sound, you'll enjoy Go West, Young Man.