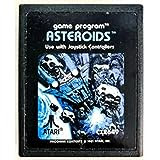 It seems today that most video games have an end game or some mission you are trying to accomplish.  But in the early days of video games, most of them featured the same idea repeated in multiple levels of increasing difficulty with the real goal being getting the highest score possible before dying.  Does that make some of these game repetitive?  On the contrary, some of them are highly addictive, as Asteroids for the Atari 2600 proves.

The premise of the game is very simple - you are in a ship in space that has been surrounded by giant asteroids.  You have to blast them all out of the sky before they run into your ship.  Each level starts with a bunch of large asteroids.  When you hit those, you get two medium size asteroids.  Hitting those turns them into one small asteroid that disappears when you hit it.

As you can well imagine, those when the asteroids start multiplying, it can get chaotic quickly.  While you only start with four big asteroids in the first level, every one after that starts with nine.

This game was an import from an Atari arcade game.  I never played the arcade version much, but I loved this game.  It's easy to play for hours without even realizing it as you try to top your score.

So what makes up the differences?  Well, there are four options for extra lives, at 5000, 10,000, 20,000, or never.  You can have the asteroids move on screen slow or fast.  More than anything, slow just means they always move on the screen from top to bottom.  The speed does pick up a little in fast, but the biggest change is that some of the smaller asteroids move diagonally, making the challenge more fun.

Finally, there are four different features that can be activated by pulling down on the joystick.  In the first one, you use hyperspace to disappear from your current location to one picked at random.  It never fails, but when I use this, I disappear from an oncoming asteroid only to appear in the path of another with no time to react.  The second option is a shield which you can use for two seconds before you explode.  Third, your ship flips 180 degrees, which is helpful if the asteroid that is about to kill you is coming from behind.  Finally, there is no special feature.

The difficulty switches in the back of the game are also used here.  In A (which is the harder setting), satellites and UFOs appear every so often, shooting in a random pattern.  They'll hit the asteroids and you, but you do get bonus points if you hit them.

And there's the super easy children's game variation.  It has slow asteroids and hyperspace.  Best I can tell what sets it apart from the regular game variation with these options is that the big asteroids only turn into one medium asteroid instead of two.

I already mentioned that you use the joystick controller with this game.  The controls are fairly self-explanatory.  When you move the joystick left, you spin counter clockwise.  Pressing right spins you clockwise.  And if you press up, your ship moves in the direction it is facing.  That is the only part of the controls that takes getting used to because your ship doesn't stop right away but slows down and eventually stops.  Eventually, you can get control of how far you'll move when you press up and hold it.  As I already mentioned, pressing down on the joystick activates the special feature if you have one.  Finally, the red fire button…wait for it…fires.  You can't hold it down and continuously fire, so your thumb will get quite the work out.

Most of the graphics for the Atari 2600 are laughable by today's standards, but the graphics here hold up reasonably well.  Of course, that's because the game is fairly simple.  Your ship is basically a triangle.  The asteroids are circles with jagged edges.  The most complicated things are the satellites and UFOs, and while they are basically bigger and smaller versions of the same thing, they look pretty good.  Yes, everything has a blocky appearance to it, but you can immediately tell what everything is.

The entire time you are playing, there's basic music in the background that reminds me of the theme from Jaws.  The rest of the sound is pretty basic, you get a sound when you fire and explosion sounds when the asteroids are hit or you die.  Additionally, the satellites and UFOs make noise when they appear.  Again, it's not outstanding, but it serves the game well.  You can always tell what is happening.


The arcade version of Asteroids was popular in the late 70's, and the Atari 2600 version appeared not too much later.  And even all these years later, it's fun to sit down and waste a few hours blowing those space rocks out of the sky and seeing just how high a score you can get.
Posted by Mark Baker at 5:55 PM