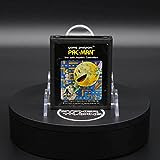 Pros: Still fun
Cons: Too many pointless changes from the arcade version
The Bottom Line:
They got basics right
But there are so many flaws
It's best just to skip


Fun but Too Many Unforced Errors

By the time I bought my Atari 2600 in 1984, Pac-Man had become the default game they bundled with the machine.  That was fine with me.  As with most anyone around at the time, I was a Pac-Man addict, and I wanted to get the game.  I'm not sure if they were including it because they knew everyone would want it or if it was because it was such a poor version of the arcade classic that no one was buying it.

Now don't misunderstand me.  The basics of the game are the same as always.  You are the always hungry Pac-Man and you have to eat all the pellets in the maze while avoiding the ghosts who are out to eat you.  You get four power pills per level that, for a limited time, make the ghosts vulnerable so you can eat them.  Every time you clear a maze, you get a new one and an extra life, and the ghosts speed up a little.  There's even still a bonus item, only a vitamin pill, which appears for a little while.

Atari was famous for the game variations that were included with many of the cartridges.  In this case, you can change the ghost speed from very slow to fast.  Pac-Man has a choice of two speeds, slow or fast.  In both cases, it is a subtle different at the beginning, but it seems to become greater the more levels you clear.  Additionally, you can use the "difficulty switches" on the back of the machine to determine how long the ghosts stay vulnerable after eating a power pill.

You can play the game by yourself or with a friend.  Just like the arcade, you take turns.

So far, it sounds pretty good, right?  So where's the problem?

Is it with the graphics?  Well, they are certainly less than the arcade, but in keeping with the graphics on other Atari 2600 games.  The pellets and maze look fine, although the smaller squares making the ghosts and Pac-Man leave a little to be desired.

How about the sound?  A few of the sounds are similar to the arcade version, and some of them aren't.  The "plink" sound that comes from eating a pellet is almost laughable.  Again, it's not great but it's not the main issues.

The controls then?  Absolutely not.  The joystick works fabulously and the game responses quickly, moving you in all four directions.  The button does nothing during the game, although you can use it to start the new game.

No, the problems come from things that could have easily been avoided.  I get the feeling that they rushed this game through without giving it any thought to how fans of the arcade game would react.  For starters, the maze is completely different.  Plus the tunnels are at the top and bottom, not the sides.  The box that the ghosts start in and regenerate from has its opening on the side and not the top.

While Pac-Man moves in all four directions and eats any pellet he touches, he only faces right or left.  And when he eats a ghost, he always stops for a second and faces to the right.

The ghosts aren't four different colors.  They are all one basic color.  And they get a little dimmer when you eat a power pill.  In fact, if it weren't for the music, it would be hard to tell when they go back to normal.

The entire game is pretty monochromatic.  As a kid, I thought it was because I was playing this on a black and white TV, but it hardly changed when I was finally able to upgrade to color.

You die when you come close to a ghost, meaning those last minute turns that work in the arcade don't work here.  On the plus side, you also eat a ghost if you get to close to him.

I would be willing to excuse this as weaknesses of the Atari 2600 platform itself, but when they released Ms. Pac-Man, they took the time to correct many of these issues, so it was just laziness.


Don't get me wrong, the game is still fun.  But Pac-Man is much less than it should have been.  I suggest skipping this one and tracking down the much better Ms. Pac-Man cartridge instead.
Posted by Mark Baker at 2:57 PM