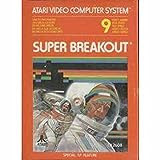 Pros: Simple yet addictive game play.
Cons: The sounds when the ball hits the bricks
The Bottom Line:
Simple idea
Bounce the ball and hit the bricks
But addicting fun

By the time I bought my Atari 2600, they had released Super Breakout, a sequel to the game Breakout.  While I always intended to go back and get the original, I never did track it down until I was an adult.  But that hardly matters because this game was pretty addicting enough.

The concept is super simple.  You control a paddle at the bottom of the screen.  Your mission is to keep one or more balls in the air and knock out the bricks in the wall in front of you.  Any time you miss a ball, you lose a life, and you get five lives to rack up the highest score.

Yes, it's a variation on Pong, one of the first video games ever.  But darn it, it's still fun and addicting.  I stuck the game in again to refresh myself on it before writing this review, and I played for a good 30 minutes and didn't really want to stop.  Usually, it's because I just barely miss my last ball, and I know I can do better.

Of course, the game variations help, too.  You can play with just one paddle and one ball in the variation called Breakout.  There's a child's variation on Breakout where the ball never speeds up and the paddle size never shrinks, something that happens in all the others.  Double gives you a dual level paddle and two balls at the start of each turn, while Cavity sets two balls in the middle of the brick wall that you can use once you've freed them.  In all of these, if you hit all the brinks, you get a new playing field.  Finally, Progressive keeps the brinks coming toward you with new rows filling in behind in a never ending game.

Honestly, I hardly ever played the plain Breakout version.  I loved having multiple balls I was trying to control.  Not only does it multiply the points you get for hitting a brick, but it makes having one ball feeling boring.  The exception is the Progressive version.  The longer the ball is in play, the faster the field moves toward you.  You can wind up in some pretty sticky situations on that one very quickly.  Unfortunately, Progressive is the only version here with no two player version, something I've never understood since you always just took turns playing two players on the other games.

The graphics are simple, but they don't need to be anything else.  The bricks form a solid line with rectangles disappearing as you hit them.  The paddle you control is also a rectangle.  The only thing that's odd is the ball, which is really a square.

When the ball hits the paddle or bounces off the sides of the playing area, it makes an appropriate noise.  What I don't get are the musical sounds that are made as you hits the bricks in the walls.  They sound like a cross between a piano note and a string being plucked.  It's a weird combination.  It can grow a little tiresome, but it's easy to tune it out, and if you do decide to mute the sound on the TV, you aren't missing much.

Super Breakout is further proof that simple can be quite fun and addicting.  If you've missed this Atari 2600 classic, add it to your collection today.
Posted by Mark Baker at 4:34 PM