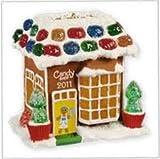 Pros: Roof is pretty when lit up
Cons: No real difference between this and original version
The Bottom Line:
A pointless repaint
So close to original
And pretty much plain


A Pointless Repaint of an Okay Ornament

Hallmark has a habit of releasing "repaints" or "colorways" of their more popular ornaments as a way to get collectors to spend more money on a very similar item.  And, as a collector, I fall for it.  That's how I wound up with Candy Shop, a repaint of the 2011 offering in the Noelville ornament series. Candy Shop was originally sold at the ornament collector event from 2011.  I'm not that big a fan of the original, and the new color scheme does nothing to change my mind.

This series features a village made up of decorated gingerbread houses.  Candy Shop is a rather plain four walls of brown gingerbread.  The side walls feature large windows, and the front has a door and a bay window.  All the windows are outlined by white frosting, and the bay window has a white lattice on it.  Standing in the doorway is a gingerbread man wearing a white apron and holding a large lollipop.  There are some gumdrop plants on the corners of the building, and the roof is made up of various colored hard candies.

As with the original, the overall effect is rather plain.  Brown is the predominate color, and there are no fun decorations that show any real creativity, something I appreciated about the earlier entries in the series.

Furthermore, the changes between the two ornaments are rather minor.  The frosting is white here, but was green in the original.  Candy Shop has been written above the door.  The gingerbread person in the front door has changed, but that's just a sticker on the plastic covering over the door.  The planters around the building are now red, and the hard candies on the roof have changed color.  Really, there's not that much that sets the two apart.  Sometimes, the repaint version is very different and beautiful in its own way.  Here, all I can think is why bother.

As with the original ornament, there is a hole in the back that allows you to put a Christmas tree light in the back and enjoy color coming through the windows and the hard candy roof tiles.  This was one of the big draws to the series originally, and I do still love that aspect of the ornament.

Based on my limited experience, it seems to be hit or miss whether Hallmark includes the number in a Christmas tree they use on their series ornaments on repaints since these are not official parts of the series.  Mine does have the 6 in a Christmas tree on it since it is a repaint of the sixth ornament in the series.

Being a building, it has a nice flat base you can use to display it on any flat service.  I hung mine on my tree this year, and it hangs straight.

So if I'm not too impressed with this ornament, why did I buy it?  Because I'm a collector, and I wanted to have all of the shops in the series.  While I put other on my tree this year, I will probably rotate them so they are never out at the same time in the future.  Really, if you have one, you don't need the other.  The original was okay, so this one is okay, but there's little point in getting both.

Candy Shop shows just how weak the original Noelville 2011 entry was.  They changed the color where they could, but there was hardly any color to being with, so they had nowhere to go.